Tetra Tech is a well respected full-service engineering and science firm based in North America with a substantial global presence focused on project delivery and innovative solutions with 14,000 employees and 330 offices worldwide. Tetra Tech provides the full-range of mining services to the natural resources extraction industry to achieve maximum economic performance through exploration and development to production and closure. Tetra Tech has completed over 100 projects in the Alaska/Arctic Region.

At Golden Summit, resource drilling to date has been confined to a 300 m by 1.5 km area (approx. 110 acres) however, the entire Golden Summit project area covers a 13,000 acre area and hosts numerous other significant exploration targets with potential to host additional resources. The PEA will examine potential for a stand alone heap leach operation and will also complete a comprehensive review of the current sulphide resource using different cut off grades. The following resource table demonstrates the overall resource at varying cut-off grades. 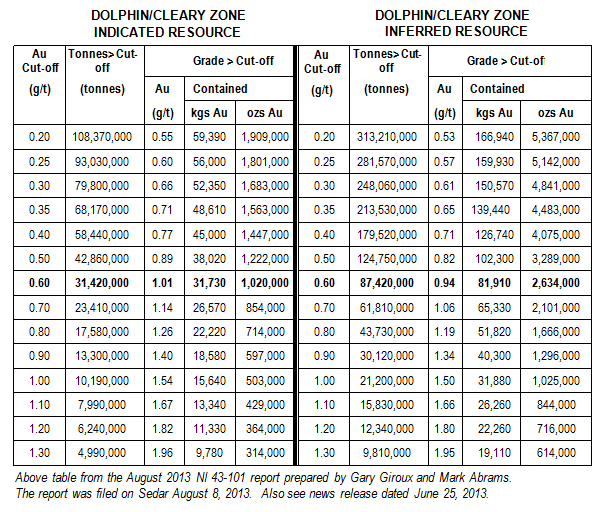 The most recent report included the estimation of an initial oxide component within the resource. The oxide resource was calculated to be 25,026,200 tonnes averaging 0.55 g/t Au for 439,000 ounces in the indicated category and 16,620,510 tonnes averaging 0.47 g/t for 253,000 ounces in the inferred category using a 0.20 g/t cut off. The oxide cap is contained largely within the upper 200 feet (60 metres) of the resource and has significant room for near term expansion in the immediate resource area and throughout the project area.
Golden Summit continues to demonstrate its potential for growth. Ground geophysics and geochemical surveys carried out in the last two years in conjunction with further compilation work has identified other significant and potentially higher grade targets in the immediate resource area.