The Golden Summit Property is located a 30 minute drive from the city of Fairbanks, the second largest city in Alaska (population of the greater Fairbanks area is approximately 100,000). Fairbanks serves as a major population and supply center for the interior region of Alaska.

In February 2020, a drill program commenced which was designed to test a new interpretation by Freegold that the Cleary Hill vein swarm (CVS) may extend to the southwest toward the Dolphin intrusive. Hole GSDL2001, aimed at testing this hypothesis, returned 188 metres grading 3.69 g/t Au, a second hole GSDL2002 was completed to a depth of only 165m before drilling was shutdown as a result of the COVID 19 pandemic.

Drilling recommenced in mid June and Hole GSDL2002 was completed to at depth of 548 metres. Both GSDL2001 and GSDL2002 intercepted the projected higher grade mineralization. Drilling is continuing on the project and initial results are continuing to confirm Freegold’s revised interpretation, although the orientation of the higher grade zone remains to be determined. Considerable additional drilling will be necessary to further define the orientation. The current program is also testing the Cleary Hill vein system at depth as well as the area to the south of it where early workings included the Wackwitz and Colorado vein zones which have never been tested to depth or along strike to the east.

Drilling is expected to continue until the end of 2021. The current exploration program has multiple objectives: 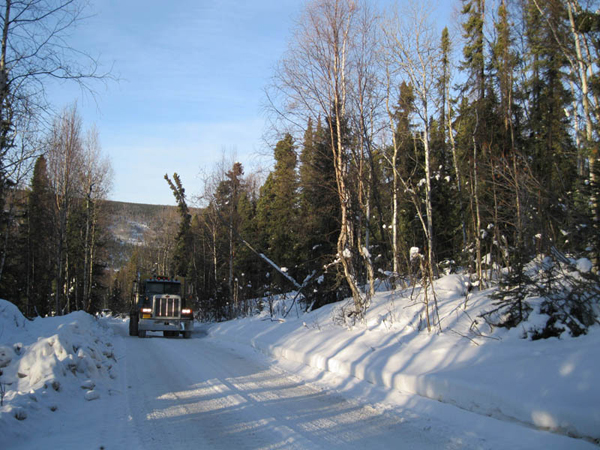 Small dikes of granodiorite cutting tonalite have been observed in core, and altered granitic dikes cut both altered and unaltered granodiorite and tonalite. This suggests multiple phases of intrusion and hydrothermal alteration. Two radiometric age dates, including two sericite Ar40/Ar39 plateau age dates (McCoy, 1996), place some constraints on the timing of crystallization and mineralization. The sericite ages were obtained from two different samples representing two distinctly different styles of gold mineralization. One sample, from stockwork style mineralization, was 90.1 Ma. Another sample, from a sericite shear-zone, was 88.3 Ma. These ages are quite similar to ages from Fort Knox (86.3-88.2 Ma). Due to age and chemical similarities, most associate the Dolphin and Fort Knox intrusive rocks with widespread intrusive-related gold deposits in the Tintina Gold Belt.

There are three styles of gold occurrences that have identified on the Property, including: 1) intrusive-hosted sulfide disseminations and sulfide-quartz stockwork veinlets (such as the Dolphin gold deposit); 2) auriferous sulfide-quartz veins; and 3) shear-hosted gold-bearing veinlets. All three types are considered to be part of a large-scale intrusive-related gold system on the Property. 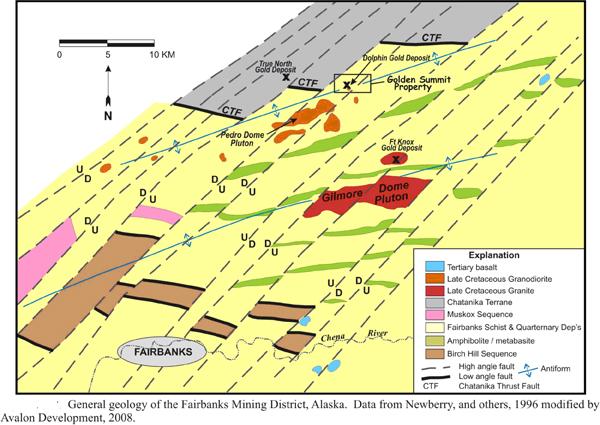 Metallurgical testing for the Project was initiated in 2012 with bottle roll tests being performed on 10 different drill samples with a primary objective of obtaining a preliminary indication of the cyanide leaching characteristics of the oxide mineralogy within the deposit. This testwork was performed by Kappes, Cassiday & Associates (KCA). A second set of process testwork started in 2013 and continued into 2014 on five different mineralogical composites. These tests were performed by SGS Canada Inc. (SGS). As part of this testwork SGS received 279 drill core samples that were composited into five different rock types: oxide, transition, hornfels sulfide, intrusive sulfide, and schist sulfide. This testwork primarily focused on investigation of various processing methods for the recovery of gold from sulfide materials. Additional bottle roll and column leach testwork was performed later in 2014 to investigate grind sensitivities on four drill core composites of different mineralogy and to examine heap leach behavior in the oxide material. The different composites were designated as oxide, transition, intrusive sulfide, and hornfels sulfide. These composites were initially subjected to coarse bottle roll tests conducted at five different feed sizes.

One column leach test was performed on the crushed oxide composite to determine heap leaching characteristics of the material. These tests were performed by McClelland Laboratories, Inc with results received in January 2015. Gold extractions over 80% were achieved within 14 days on coarse crushed material (80% -25 mm). The column test was permitted to run for 65 days and final extractions were 85% for gold.

Project cost estimates and economics are prepared on an annual basis. Based upon design criteria presented in the Tetra Tech Report, the level of accuracy of the estimate is considered ±35%.

A total of 27 holes were drilled in an area north of the current resource area. Using results of the previously completed RAB (Rotary Air Blast) drilling, ground resistivity and soil geochemistry, a series of vertical holes, spaced roughly 50 metres apart in an east -west-north-south grid pattern were drilled. Drilled to an average depth of 70 metres, the hole pattern was designed to determine if the current oxide resource could be expanded to the north as well as to establish boundaries to the current oxide resource.

The results of the 2017 program demonstrated the potential for expansion of the current oxide resource at Golden Summit with the majority of the holes returning average grades above the internal cut-off used in the Preliminary Economic Assessment completed in January 2016.