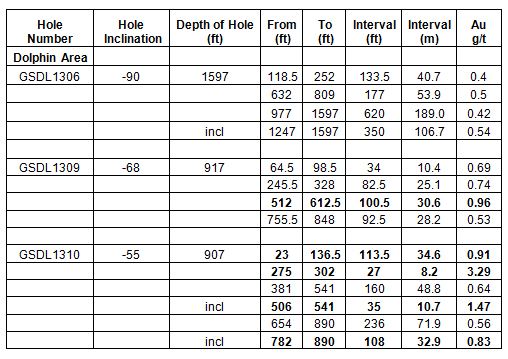 Freegold continues to work towards completion of an updated NI 43-101 compliant resource based on the oxide component of the current resource inventory. The oxide cap at Golden Summit is contained largely to the upper 200 feet (60 metres) project wide.

The Dolphin/Cleary area is the only area of the Golden Summit project that has been intensively drilled for resource definition and it remains open to expansion in all directions and to depth with the mineralization increasing in grade at depth.

The Qualified Person who has reviewed the technical disclosure contained in this release is Curtis J. Freeman, M.Sc., PGeo who is the primary geological consultant for the project. Drill cores were cut in half using a diamond saw, with one-half placed in sealed bags for geochemical analysis. Core samples were picked up on-site by ALS Chemex and transported to their facility in Fairbanks, Alaska. A sample quality control/quality assurance program was implemented.