Freegold also is working towards completion of an updated NI 43-101 compliant resource based on the oxide component of the current resource inventory. The oxide cap at Golden Summit is contained largely to the upper 200 feet (60 metres) project wide. 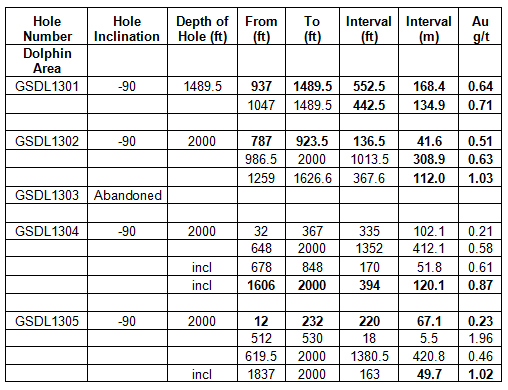 Width refers to drill hole intercepts, true widths can not be determined due to uncertain geometry of mineralization. Values greater than 30 g/t Au were cut to 30 g/t Au.

Holes GDSL1301 through GSDL1306 were drilled in a fence approximately 80 metres east of the previous drilling. Results indicate the mineralization within the Dolphin intrusive remains open to the east and to depth, with the mineralization increasing in grade at depth.

The Dolphin/Cleary area is the only area of the Golden Summit project that has been intensively drilled for resource definition and it remains open to expansion to the southwest, east and to depth. At present it covers a 300 metre by 1.5 km area (approx. 110 acres) however the entire Golden Summit project area covers an 11,400 acre area and hosts numerous other significant exploration targets with potential to host additional resources.

Other prospective areas on the project include the Iowa, Too Much Gold, Goose Creek and Christina Area which are located 6m, 5 km, 4km and 2km to the east respectively.

Similar to the Tamarack Area – the Goose Creek, Too Much Gold and Iowa areas were last drilled 1998 under Freegold’s operatorship. In the last two years Freegold has undertaken geophysical and geochemical surveys as well a compilation of past drill results in order to evaluate these other target areas which lie between 2 to 6 km from the Dolphin/Cleary Resource area. Widely spaced reverse circulation drilling to maximum depth of 161 metres was completed in the Goose Creek area in 1992, 1997 and 1998 with a significant number of holes drilled to a depth of less than 100 metres. Highlights include GSR92-01 which intersected 36 metres grading 0.8 g/t Au, and 8.1 g/t Ag, GCR97-01 which returned 49 metres grading 4.1 g/t Au, and 55 metres grading 30 g/t Ag , GCD 97-01 which intersected 19 metres of 1.0 g/t Au and 28.4 g/t Ag and GCR98-01 returned 18 metres of 3.8 g/t Au and 6.3 g/t Ag at the bottom the hole. GSR 92-04 returned 19.8 metres grading 1.72 g/t gold.

The Qualified Person who has reviewed the technical disclosure contained in this release is Curtis J. Freeman, M.Sc., PGeo who is the primary geological consultant for the project. Drill cores were cut in half using a diamond saw, with one-half placed in sealed bags for geochemical analysis. Core samples were picked up on-site by ALS Chemex and transported to their facility in Fairbanks, Alaska. A sample quality control/quality assurance program was implemented.