This update has included 8 additional holes completed since the December 2012 Resource was completed (Abrams and Giroux, 2012). Limited drillling in 2013 has again expanded the resource with an increase of 9% in both categories. In addition for this update an oxide resource was calculated. The oxide cap is contained largely within the upper 200 feet (60 metres) of the resource. To date resource drilling has been confined to a 300 metre by 1.5 km area (approx. 110 acres) however the entire Golden Summit project area covers an 11,400 acre area and hosts numerous other significant exploration targets with potential to host additional resources, all of which have an oxide cap in the upper 200 feet (60 metres).

The indicated and inferred resource using a 0.2 gram/tonne (g/t) cut-off for the oxide component is: 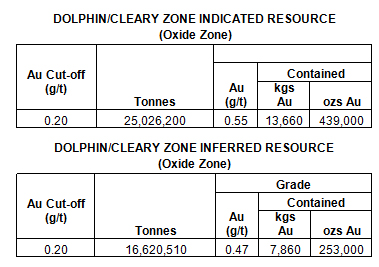 The indicated and inferred resource using a 0.3 and 0.35 gram/tonne (g/t) cut-off for the total resource is: 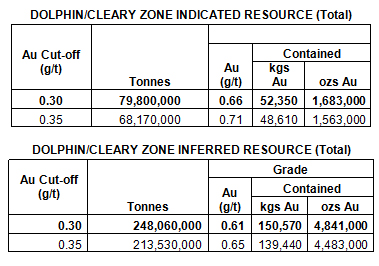 The resource was calculated using a block model with blocks measuring 10 by 10 by 5 metres in size that were populated using a combination of ordinary kriging and indicator kriging; blocks within the Dolphin mineralized solid were summed to arrive at the total tonnage and average grade. In the following tables a 0.30 g/t and 0.35 g/t are highlighted as possible open pit cut offs. No economic parametres were utilized in determining the cutoffs.

Additional drilling will focus both on expanding the current oxide zone, increasing the global resource as well as upgrading the resource into the indicated category. The deposit remains open in all directions and to depth in the Dolphin/Cleary Hill Area. Approximately 600 metres east of the Dolphin/Cleary Zone lies the Tamarack area. Past reverse circulation drilling in this zone intersected 62 metres grading 0.55 g/t Au in TKR 98-01, and 130 metres grading 0.68 g/t Au in TKR 98-07 . The last drilling completed in the Tamarack area was in 1998. Other prospective areas on the project include the Iowa, Too Much Gold, Goose Creek and Christina Area which are located 6m, 5 km, 4km and 2km to the east respectively. All of these prospective areas have an oxide cap in the upper 200 feet (60 metres).

Preliminary bottle roll tests on the oxide material has indicated recoveries in excess of 85% in 24hrs. An extensive metallurgical programme is currently underway. 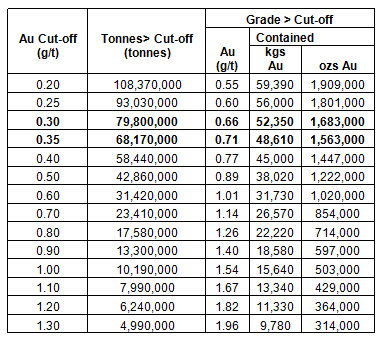 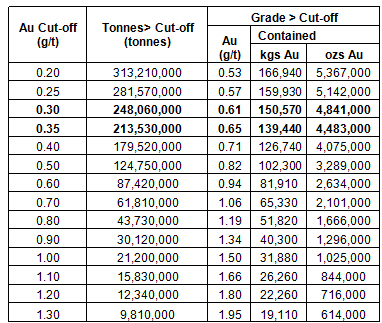 The Qualified Person for this release is G.H. Giroux, M.A.Sc., P.Eng., who has reviewed and approved the contents of this press release. The mineral resource estimate has been prepared in compliance with the standards of NI43-101. Mr. Giroux acted as the Qualified Person, as defined in NI43-101 and is independent of the Company. The NI43-101 report will be finalized and filed on SEDAR within 45 days of the date of this news release.