March 13th, 2013 (Vancouver, BC) - Freegold Ventures Limited (TSX: FVL, Frankfurt: FR4N)(“Freegold”) is pleased to report the results of a NI43-101 compliant Mineral Resource estimate recently completed on the Vinasale Gold Project located in southwest Alaska on which Freegold entered into an Exploration Agreement with an Option to Lease the Vinasale Project from Doyon Limited, an Alaskan Native Regional Corporation, in 2007. The resource estimate was completed by Giroux Consultants Ltd. of Vancouver, BC. Canada. Indicated resources are 3.41 million tonnes averaging 1.48 g/t Au for 162,000 ounces, and Inferred resources are 53.25 million tonnes averaging 1.05 g/t Au for 1,799,000 ounces of gold utilizing a cutoff value of 0.5 grams/tonne (g/t) as a possible open pit cutoff within the total blocks.

A total of 98 drill holes containing 11,284 gold assays have been completed on the project within three areas: the Central, Northeast and South Zones. The highest density of drilling has been completed in the Central Zone where 53 drill holes totaling 12,352 metres were used in estimating the resource for the Central Zone. Gold assays were capped at 20 -grams/tonne gold. Composites, 5 metres in length, were used to model the grade continuity using semivariograms. Blocks measuring 10 by 10 by 5 metres were populated using Ordinary Kriging. 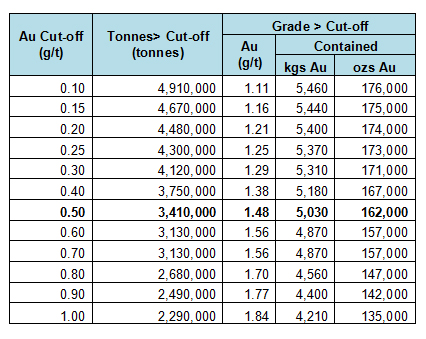 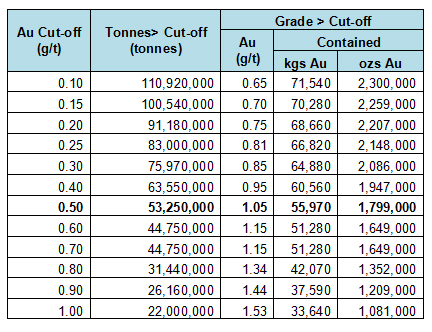 To date, mineralization in the Central Zone extends over a strike length of 400 metres and remains open to the south and to depth.

2013 program is expected to consist of additional drilling in the Central Zone where it remains open to the south, as well as potential resource definition in the North East Zone. The North East zone was further defined by the 2011 ground geophysical program and limited prior drilling.

The Qualified Person for this release is G.H. Giroux, M.A.Sc., P.Eng., who has reviewed and approved the contents of this press release.

In addition, Freegold is pleased to announce that it has extended 2,677,999 warrants from March 16, 2013 to September 16, 2013 in an effort to ensure that the warrants are exercised as a result of the overall market conditions. The warrants were issued in connection with a private placement completed by the Company on March 16, 2011. Of the 2,677,999 warrants, 298,000 warrants which are held by directors and officers of Freegold (the “Insider Warrants”) are subject to the approval of shareholders of Freegold excluding the votes attached to common shares beneficially owned by holders of the Insider Warrants and their associates (“Disinterested Shareholder Approval”), at the Company’s Annual General Meeting in June. The exercise price of the warrants of $0.65 per share will remain the same. The extension of the warrants, other than the Insider Warrants, will be effective March 26th, 2013. The extension of the Insider Warrants will be effective following receipt of Disinterested Shareholder Approval.

Drilling at Golden Summit commenced late February and is aimed at both increasing and upgrading the current NI 43-101 resource in the Dolphin/Cleary Hill areas. Assays will be reported as they become available.

Freegold is a TSX listed company focused on the exploration of gold projects in Alaska. In addition to the exploration agreement with option to lease the Vinasale Gold project in central Alaska, the Company is actively exploring its Golden Summit Project where a drill program is currently underway.