Freegold Intersects 85 Metres of 1.49 g/t of Gold at Vinasale, Alaska

August 29th, 2012 (Vancouver, BC) - Freegold Ventures Limited (TSX: FVL, Frankfurt: FR4N)(“Freegold”) is pleased to report the results of it’s summer drill program on its Vinasale Gold Project located in southwest Alaska on which Freegold entered into an Exploration Agreement with an Option to Lease the Vinasale Project from Doyon Limited, an Alaskan Native Regional Corporation, in 2007 on which Freegold completed an updated NI 43-101 resource in March 2012. The current NI 43-101 resource which was completed by Giroux Consultants Ltd. of Vancouver, BC. Canada shows inferred resources of 49.3 million tonnes averaging 1.09 g/t Au for 1,735,000 ounces of gold utilizing a cutoff value of 0.5 grams/tonne (g/t) as a possible open pit cutoff.

A total of 13 holes (3425 metres) were drilled during the 2012 program. The program was designed to follow up previously defined geochemical and geophysical targets in the North East Zone as well as to expand on the NI 43-101 resource which is hosted in the Central Zone.

Significant Results as reported below: 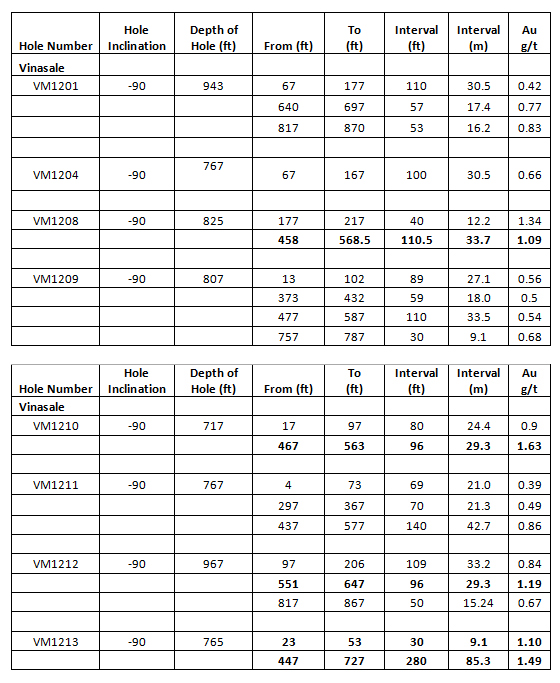 Width refers to drill hole intercepts, true widths can not be determined due to uncertain geometry of mineralization.

The Qualified Person for this release is Curt Freeman, MSC P.Geo., who has reviewed and approved the contents of this press release.

ALS Chemex was used to analyze 1289 core samples via fire assay analysis for gold plus multi element ICP-AES analysis using 4 acid digestion for the 2012 Freegold drill program. Quality control entailed insertion of 37 blanks, 106 standards, and 15 duplicates into the sample stream, at the rate of approximately one QA/QC sample every tenth assay, yielding approximately 11 % of the total assays. All of the reported standard and blank assay values were within an acceptable margin of error.

Freegold is a TSX listed company focused on the exploration of gold projects in Alaska. In addition to the exploration agreement with option to lease the Vinasale Gold project in central Alaska, the Company is actively exploring its Golden Summit Project where a 20,000 metre drill program is currently underway.