October 16th, 2012 (Vancouver, BC) - Freegold Ventures Limited (TSX: FVL, Frankfurt: FR4N) (“Freegold”) is pleased to report the results from its drill program on the Golden Summit Project located near Fairbanks, Alaska. Drilling at Golden Summit was conducted with two rigs from mid January through mid-April with one rig operating from mid May until the end of September at which point drilling ceased in order to complete the upcoming resource calculation. Drilling has been primarily focused in the Dolphin and Cleary Hill Areas.

Results from the drill program continue to demonstrate the significant expansion potential of the Dolphin/Cleary Hill resource areas. 9,714 metres have been drilled in the Dolphin Zone since January of which assays for 9,373 metres have now been reported. 5,203 meters have been drilled in the Cleary Zone since January of which all assays have now been reported. 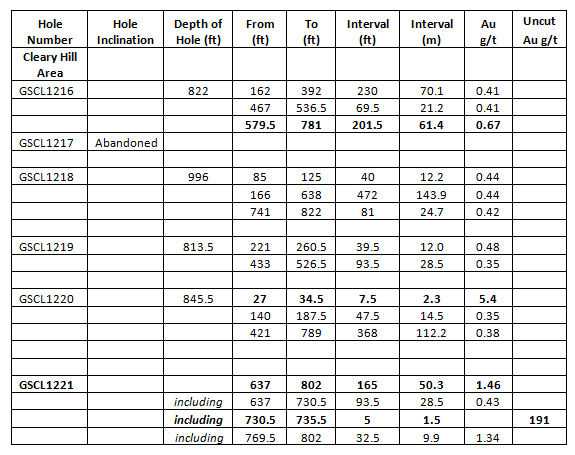 Width refers to drill hole intercepts, true widths can not be determined due to uncertain geometry of mineralization.

Within GSCL1221 the 1.5 meter interval from 730.5 to 735.5 feet returned 191 g/t Au. This sample value was cut to 30 g/t Au for the purposes of calculating the interval from 637 to 802 feet reported in the table above. All other assays reported are uncut. The bottom 9.9 metres of GSCL1221 intersected 1.34 g/t Au. This higher grade intercept appears to be the downdip extension of the vein system mined in the historic Cleary Hill Mine, from which 281,000 ounces grading 1.3 oz/t (44.5 g/t ) Au were extracted prior to its closure in 1942. Further drilling will be necessary to expand on these higher grade intercepts.

Drill cores were cut in half using a diamond saw, with one-half placed in sealed bags for geochemical analysis. Core samples were picked up on-site by Acme Analytical Lab and transported to their facility in Fairbanks, Alaska. A sample quality control/quality assurance program was implemented.