May 9th, 2012 (Vancouver, BC) - Freegold Ventures Limited (TSX: FVL, Frankfurt: FR4N) (“Freegold”) is pleased to report the results from its ongoing drill program on the Golden Summit Project located near Fairbanks, Alaska. Drilling at Golden Summit was conducted with two rigs from mid-January through mid-April and has been primarily focused in the Dolphin and Cleary Hill Areas. An updated NI43-101 compliant resource was completed on the Dolphin Zone in December of 2011 and the current drilling is aimed at expanding the current Dolphin resource which, using a 0.35 g/t cutoff, is 14,840,000 tonnes @ 0.66 g/t Au - representing 316,000 ounces in the indicated category and 50,460,000 tonnes @ 0.61 g/t Au - representing 991,000 ounces in the inferred category. 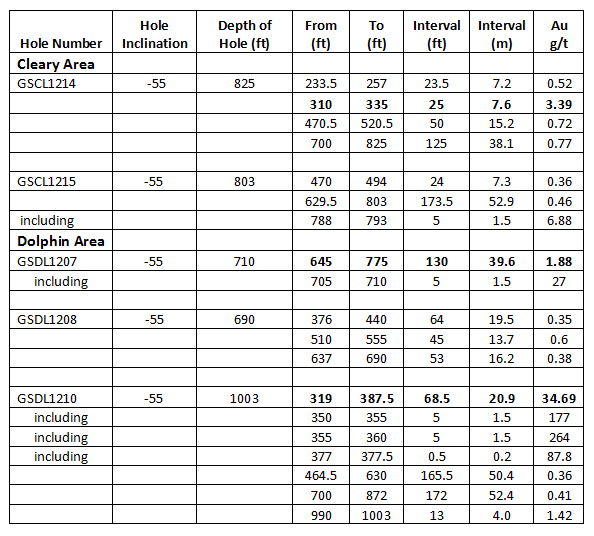 Holes GSCL1214 and 15 were collared to intercept a series of west-northwest striking high grade gold-bearing quartz veins and shear zones that occur in the hangingwall of the Cleary Hill vein system. Hole GSCL1214 (az 315 @ -55 degrees) intercepted 7.6 meters grading 3.39 g/t in shears biotite schist cut by multiple generations of sulfide (galena-sphalerite-stibnite) veins and gold-bearing quartz-sulfide veins. Unlike most other gold-bearing veins in the area, the gold-bearing interval from 310 to 335 feet contained highly anomalous lead (to 1.24%) and zinc (to 0.88%). Hole GSCL1215 (az 360 @ -55 degrees) collared from the same pad but directed due north, does not appear to have intercepted the same mineralization as GSCL1214.

Hole GSDL1210 (as 45 @ -55 degrees) was collared 45 metres south of hole GSDC 1141 which returned 187 metres grading 0.65 g/t Au. Hole GSDL1210 intercepted several intervals of mineralization, including a 20.9 meter interval grading 34.69 g/t gold. Mineralization consisted of native gold, arsenopyrite and lesser jamesonite and stibnite hosted in highly sheared biotite quartz schist cut by several generations of quartz and quartz-sulfide veins. Visible gold was observed in core at several locations within this interval. The geometry of the shear zone controlling mineralization in hole GSDL1210 remains uncertain since similar mineralization has been encountered in drilling to the west and north of this hole. The Dolphin prospect remains untested immediately south of this hole. Geochemical results are pending from hole GSDL1212, a vertical hole collared at the same site as GSDL1210. The winter 2012 drilling results continue to demonstrate the expansion potential of the Dolphin Deposit. Future drilling will focus on expanding mineralization immediately to the south and west of GSDL12-10.

3,777 metres have been drilled in the Dolphin Zone since January of which assays for 2,730 metres have now been reported.