May 1st, 2012 (Vancouver, BC) - Freegold Ventures Limited (TSX: FVL, Frankfurt: FR4N) (“Freegold”) is pleased to report the results from its ongoing drill program on the Golden Summit Project located near Fairbanks, Alaska. Drilling at Golden Summit was conducted with two rigs from mid January through mid-April and was been primarily focused in the Dolphin and Cleary Hill Area. An updated NI43-101 compliant resource was completed on the Dolphin Zone in December of 2011 and the current drilling is aimed at expanding the current Dolphin resource which, using a 0.35 g/t cutoff, is 14,840,000 tonnes @ 0.66 g/t Au - representing 316,000 ounces in the indicated category and 50,460,000 tonnes @ 0.61 g/t Au - representing 991,000 ounces in the inferred category. 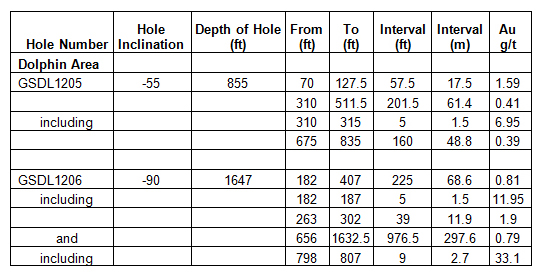 Hole GSDC1206 was a vertical hole and is the northern most deep hole drilled in the Dolphin Deposit to date. Located 250 metres north east of Hole GSDC11-32 which averaged 0.68 g/t over its entire 452 metre depth, Hole GDSC 1206 was drilled to a depth of 502 metres and intersected 297.6 metres (from 199.9 metres to 497.5 metres) grading 0.79 g/t. Results from GSDC 1206 continue to confirm the Dolphin Deposit has considerable potential for expansion at depth.