April 18th, 2012 (Vancouver, BC) - Freegold Ventures Limited (TSX: FVL, Frankfurt: FR4N) (“Freegold”) is pleased to report the results from its ongoing drill program on the Golden Summit Project located near Fairbanks, Alaska. Drilling at Golden Summit has been underway with two rigs since mid January and has been primarily focused in the Dolphin and Cleary Hill Area. An updated NI43-101 compliant resource was completed on the Dolphin Zone in December of 2011 and the current drilling is aimed at expanding the current Dolphin resource (December 2011) which using a 0.35 g/t cutoff is 14,840,000 tonnes @ 0.66 g/t Au - representing 316,000 ounces in the indicated category and 50,460,000 tonnes @ 0.61 g/t Au - representing 991,000 ounces in the inferred category.

A total of 3,856 metres were drilled in the Cleary Hill zone since January of which assays have been reported for 3,084 metres. This drilling is aimed at merging mineralization at the Cleary Hill Zone with the existing Dolphin Resource. 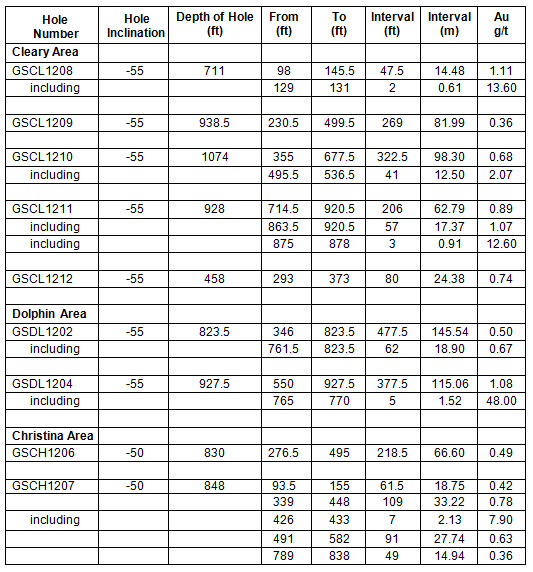 Holes GSCL1208, 1029 and 1210 were targeted at the Cleary Hill vein and, similar to other holes in this part of the prospect, encountered significant widths of +0.5 g/t gold mineralization in a mineralized envelope both above and below the high grade Cleary Hill vein. Significant intervals include 14.48 meters grading 1.11 g/t in hole GSCl1208, 98.3 meters grading 0.68 g/t in hole GSCl1210. These holes represent the western-most drilling completed during the 2011 – 2012 drilling campaigns and results indicate mineralization remains open along strike to the west.

Holes GSCL1211 and 1212 are located approximately 250 meters south of hole GSCL1210 and were targeted at a vein swarm containing the historically mined Wackwitz and Wyoming veins and the Currey zone. These new holes intercepted two separate mineralized envelopes with GSCL1211 returning 62.79 meters grading 0.89 g/t and hole GSCL1212 returning 24.38 meters grading 0.74 g/t. Additional drilling has been completed in this area to better define the extent and grade of these mineralized zones.

3,777 metres have been drilled in the Dolphin Zone since January of which assays for 4,842 metres have now been reported.

In addition 1,686 metres have been completed since January on the Christina area all assays have now been reported for the Christina Area drilling.