Vancouver – Friday, January 22, 2010 – Freegold Ventures Limited –ITF: TSX (“Freegold”) and Western Standard Metals Ltd. – WSM: TSX.V (“Western Standard”) and are pleased to announce that they have signed an Option Agreement whereby Western Standard may earn a 50% interest in the Vinasale gold project (“Project”) located in central Alaska. The Project is located in the Kuskokwim Mineral Belt, a northeast trending belt of intrusion related gold deposits that includes the 39 million ounce Donlin Creek deposit and the past producing Nixon Fork gold mine.

The Vinasale Project is located in the McGrath Mining District in the Kuskokwim region of central Alaska. The Kuskokwim region is underlain by sedimentary rocks of the Upper Cretaceous Kuskokwim Group that have been intruded by a suite of Late Cretaceous to Tertiary granitic rocks. Placer gold deposits are associated with several of these intrusions and recorded production totals 2.5 million ounces. At Vinasale, a Late Cretaceous quartz monzonite stock forms a prominent hill and is spatially and temporally associated with gold mineralization. The stock has a number of intrusive phases and is variably altered to a mineral assemblage including silica, sericite, dolomite, chlorite, tourmaline and sulphides. Sulphides occur as disseminations and in quartz-dolomite veins and breccias, and are primarily pyrite and arsenopyrite with lesser stibnite, sphalerite and galena, and minor silver and lead antimony sulphides. Higher concentrations of gold are associated with zones of quartz-sulphide veining and fracturing hosted by silica and sericite altered quartz monzonite.

Gold mineralization was first discovered at Vinasale by Central Alaskan Gold Company (CAG) in 1989. Exploration from 1990 to 1993 by CAG and their joint venture partner, Placer Dome, consisted of soil sampling, geophysics, diamond drilling (5,285 metres in 39 holes) and metallurgy. While the gold mineralization was found to be refractory, metallurgical testwork indicates that greater than 95% of the gold reports to the sulphide concentrate, thereby considerably reducing the volume of material required to be oxidized before extraction by cyanide. The Project was subsequently optioned by ASA-Montague and additional soil sampling, diamond drilling (5,262 metres in 26 holes) and metallurgy were completed in 1994. Drilling intersected significant gold values beneath multi-element soil anomalies in the Northeast, Central and South zones (Table 1). A resource of 925,000 ounces of gold (14.5 million tonnes grading 1.95 grams/tonne) was estimated for the Central Zone by Derry Michener, Booth and Wahl (1994) as part of a Prefeasibility study. (Note that the resource figures are historical in nature and are provide for information purposes only; they are not NI43-101 compliant and as such should not be relied upon). 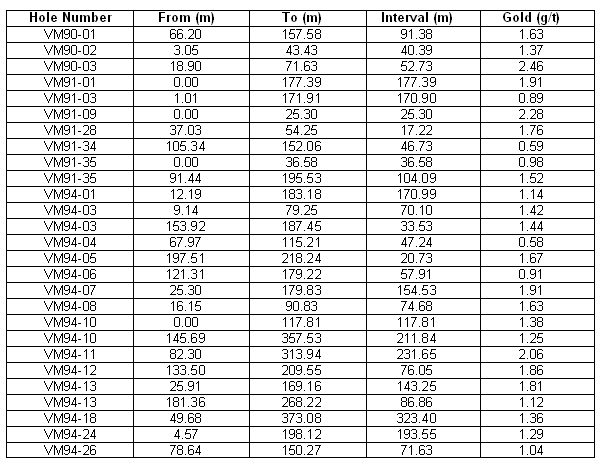 Freegold entered into a Mining Exploration Agreement with an Option to Lease the Vinasale Project from Doyon Limited, an Alaskan Native Regional Corporation in 2007. Since that time, Freegold has completed an airborne survey and a regional geochemical survey and a ground based induced polarization and magnetic survey over the northern part of the deposit. This work has identified chargeability and resistivity targets associated with the northern edge of the Vinasale stock as well as regional targets that require follow-up exploration.

The Vinasale Project is located approximately 310 kilometres northwest of Anchorage and 26 kilometres south of McGrath. Access to the Project area is by helicopter from a base in McGrath and daily commercial flights connect McGrath with Anchorage. The McGrath airstrip is adequate to handle large bulk aircraft and the Kuskokwim River is navigable to McGrath from Bethel, a port city. McGrath can provide basic services such as labour, housing, office space, communication and logistics.

Western Standard has the option to earn a 50% interest in the Project by paying Freegold CAD$350,000 on execution and by incurring exploration expenses of US$6,500,000 over three years according to the schedule shown in Table 2. Western Standard will be the operator of the Project until such time as the option is fulfilled and a joint venture is formed.

Curtis J. Freeman, M.Sc., Geological Consultant to Freegold Ventures Limited is a Qualified Person as defined by National Instrument 43-101 and has reviewed the technical disclosure contained in this News Release.

Freegold is a TSX listed company focused on the exploration of gold projects in Alaska. In addition to the Golden Summit Project, the company holds a 100% in lease interest in the Rob gold project, near the Pogo Gold Mine in the Goodpaster Mining District of Alaska and has an exploration agreement with option to lease the Vinasale Gold project in central Alaska.