Vancouver – Monday, January 11, 2010 – Freegold Ventures Limited – ITF: TSX (“Freegold”) and Western Standard Metals Ltd. – WSM: TSX.V (“Western Standard”) are pleased to announce that they have signed an Option Agreement whereby Western Standard may earn a 50% interest in the Golden Summit Project (“Project”), which is located in east central Alaska. The Project is host to a number of gold occurrences that are similar in age and style to several nearby multi-million ounce intrusion related gold deposits including Fort Knox, True North and Ryan Lode.

The Project is underlain by rocks of the Yukon-Tanana Terrane consisting of Paleozoic metavolcanic and metasedimentary rocks of the Cleary Sequence and Fairbanks Schist, which are in thrust contact and interleaved with eclogite and amphibolite facies rocks of the Chatanika Terrane. Bedrock geology is dominated by east-northeast trending lithological and structural features. The above rocks are cut by mid-Cretaceous intrusive rocks that range in composition from diorite to granite. These intrusive rocks are thought to be spatially and genetically related to mineralization on the Project. Gold mineralization occurs in a number of different geological settings including: discrete quartz veins and stockworks within shear zones, replacement zones and skarn within calcareous rocks, and as disseminations within intrusive rocks. Geochemically the gold mineralization is commonly associated with a distinct suite of one or more of the following elements: bismuth, tellurium, tungsten, arsenic, antimony, copper, mercury, silver, lead and zinc.

Freegold acquired an interest in the Golden Summit Project in 1991 and since then has conducted numerous exploration programs consisting of mapping, soil sampling (7,729 samples), trenching (5,500m), lithogeochemistry, geophysics, and reverse circulation and diamond drilling (26,900m). This work has identified a number of significant gold occurrences and/or found extensions to mineralization adjacent to historic mines, however a number of targets remain untested or have been tested by limited exploration. Exploration targets with significant potential include from west to east: Tolovana-Dolphin deposit, Newsboy Mine, Cleary Hill Mine, American Eagle Vein Swarm and Hi Yu Mine. Selected drill intersections from some of these deposits are presented in Table 1. 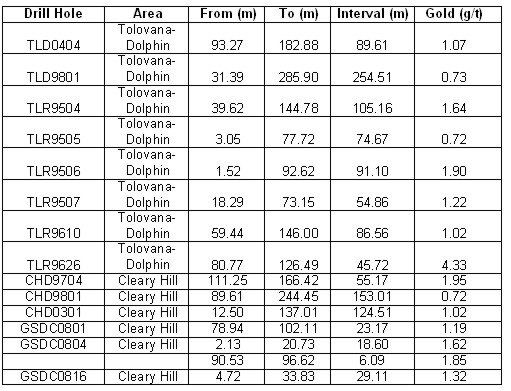 Access to the Project area is by the paved Steese Highway and privately maintained gravel roads allow easy access to most of the property on a year round basis. Infrastructure includes high voltage electrical power lines, land telephone lines and a cellular phone service. The greater Fairbanks area supports a population of approximately 75,000 people from which the Project can obtain skilled labour and services. Fairbanks has an International Airport with daily service to the lower 48-states and rail connects Fairbanks to Anchorage, a port city. Mining operations such as Kinross Gold’s Fort Knox milling and valley leach operation can be conducted on a year-round basis.

Western Standard has the option to earn a 50% interest in the Project by paying Freegold CAD$300,000 on execution and by incurring exploration expenses of US$5,750,000 over four years according to the schedule shown in Table 2. Western Standard will be the operator of the Project until such time as the option is fulfilled and a joint venture is formed.

Western Standard plans an exploration program consisting of data compilation, verification and target generation to identify areas for drilling in 2010. Initial drilling will be focused on extending the near surface intrusion hosted gold mineralization intersected in historic drill holes at the Tolovana-Dolphin deposit. The Company is targeting large, bulk mineable zones in their exploration program.

Curtis J. Freeman, M.Sc. Geological Consultant to Freegold Ventures Limited is a Qualified Person as defined by National Instrument 43-101 and has reviewed the technical disclosure contained in this News Release.

Freegold is a TSX listed company focused on the exploration of gold projects in Alaska. In addition to the Golden Summit Project, the company holds a 100% in lease interest in the Rob gold project, near the Pogo Gold Mine in the Goodpaster Mining District of Alaska and has an exploration agreement with option to lease the Vinasale Gold project in central Alaska.