October 28th, 2010(Vancouver, BC) – Freegold Ventures Limited (TSX: FVL Frankfurt: FR4N)(“Freegold”) is pleased to report assays from its Vinasale Project, in southwestern Alaska. A total of 6 holes were drilled during the program for total footage of 6,386 feet (1,947m). The program was aimed at expanding the known resources as well as testing weaker geophysical anomalies to the northeast of known mineralization. Significant results are reported as follows: 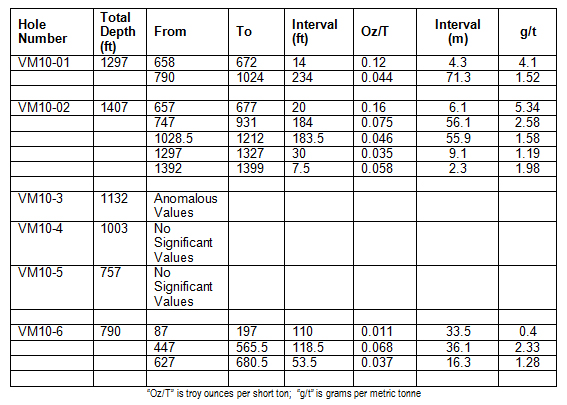 Hole VM10-06 is a vertical hole terminated at a depth of 790 ft. It was drilled 50 metres west of hole VM94-26, and confirms mineralization to the west and to the north of that hole.

To date mineralization in the Central Zone extends over a length of 400 metres and remains open to the north, south and to depth.

The Vinasale Project is located approximately 310 kilometres northwest of Anchorage and 26 kilometres south of McGrath. Access to the Project area is by helicopter from a base in McGrath, and there are daily commercial flights from Anchorage to McGrath. Freegold entered into a Mining Exploration Agreement with an Option to Lease the Vinasale Project from Doyon Limited, an Alaskan Native Regional Corporation in 2007.

A historical resource of 925,000 ounces of gold (14.5 million tonnes grading 1.95 grams/tonne) was estimated for the Central Zone by Derry Michener, Booth and Wahl (1994) as part of a Prefeasibility study. (Note that the resource figures are historical in nature and are provide for information purposes only; they are not NI43-101 compliant and as such should not be relied upon).

ALS Chemex was used to analyze 836 core samples via fire assay analysis for gold plus multi element ICP-AES and ICP-MS analysis using 4 acid digestion. Quality control entailed insertion of 27 blanks and 74 standards into the sample stream, at the rate of approximately one QA/QC sample every tenth assay, yielding approximately 12% of the total assays. On average all of the reported standard and blank assay values were within an acceptable margin of error.

David Adams, Msc is the Qualified Person responsible for the technical disclosure contained in this release.