The PEA evaluates a two-phase, 24-year open pit mine generating two gold ore streams, each operating at 10,000 tonnes per day (tpd). Processing operations for the oxide and sulphide mineralized materials are heap leach and bioxidation respectively.

Kristina Walcott, Freegold President and CEO commented: “The Golden Summit Project has a number of competitive advantages including existing infrastructure, a favorable permitting climate and proximity to Fairbanks. The site is within five miles of Kinross Gold’s Fort Knox mine, a heap leach and milling operation, which has done tremendously well for Alaska. We have ready access to an available, seasoned labour pool.” She further noted, “For this Project, we can offset early costs with a phased approach, and can take advantage of the Alaska DNR exploration incentive credit program and believe we can quickly grow the oxide Mineral Resource with more drilling, while utilizing the infrastructure and labour readily available in the area.”

Golden Summit PEA Assumptions and Economic Results and presented in US $:

The following assumptions were used in the PEA evaluation: 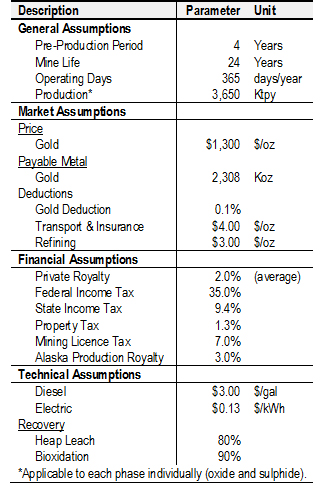 The following operating costs were developed for the Golden Summit Project: 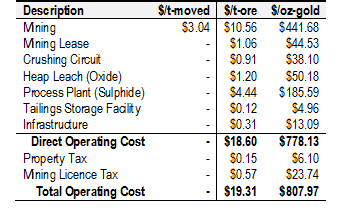 The following capital costs were developed for the Golden Summit Project and are presented in US $: 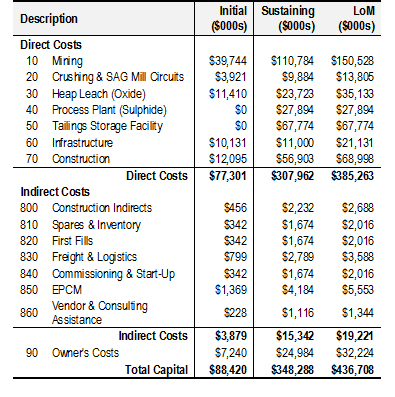 Based on the assumptions and costs above, the following cash flow results are presented:

Value-enhancing opportunities, such as leased mine equipment, improved metallurgical performance through additional testing, liquid natural gas, local labour surveys, power generation sets, and local power contracts will be further investigated as the Project moves towards the Preliminary Feasibility stage. Additionally, there is potential for immediate resource expansion with continued drilling efforts within the oxide zone. Work completed to date which includes geophysical, geochemical and geological studies, indicates that there is a very strong possibility of being able to expand upon the known resource. A similar geochemical and geophysical signature over the known resource appears to extend both southwest and to the west over distances in excess of one (1) kilometre.

Ore sample composites from five different rock types were taken from various drill core for metallurgical testing. The five composites were subjected to over 60 cyanidation tests to investigate gold recoveries using various methods of sulphide oxidation and cyanidation. A total of 36 coarse bottle roll tests were also completed to define parameters for a single column leach test to simulate heap leaching conditions for the Oxide material. In addition to the leach tests, the five composites had Bond Ball Mill Work Indices conducted to determine comminution requirements. Head analyses for gold, silver, and sulphur were also conducted. Major conclusions from the test program include:

Gold mineralization on the Golden Summit property occurs in three main forms, including 1) intrusive-hosted sulphide-quartz stockwork veinlets (such as the Dolphin gold deposit), 2) auriferous sulphide-quartz veins (exploited by historic underground mines), and 3) shear-hosted gold-bearing veinlets. All three types are considered to be part of a large-scale intrusive-related gold system on the property. The Dolphin gold deposit is hosted in the Dolphin stock, which consists largely of granodiorite and tonalite, similar to the Pedro Dome pluton. It is the only large intrusive body known on the property at this time. The Dolphin stock is approximately the same age as the nearby Fort Knox pluton, which hosts Kinross Gold’s Fort Knox gold mine. Freegold made the initial discovery of widespread low-grade gold mineralization in the Dolphin stock during the initial drilling campaign on the prospect in 1995; however resource definition drilling only commenced in 2011. A total of 87 holes have been drilled within the resource area since 2011 totaling 24,156 metres.

An update of the resource reported in December 2012 (Abrams and Giroux, 2012) was estimated incorporating an additional ten drill holes completed in 2013. The update also subdivides the resource into oxide and sulphide portions. The effective date for this resource is May 31, 2013, the date that the data was received. There were three drill holes completed since this date which do not have a material effect on this resource and as a result this resource remains current. The three new holes were compared to the estimated blocks they pass through and found to correlate well. Of the total 330 drill holes on the property, 185 penetrated the three dimensional geologic Dolphin Stock solid and were used for the estimate. The gold grade distribution identified multiple overlapping lognormal populations present. Erratic gold assays were capped at 88 g/t. Uniform down-hole composites three m in length were formed to honour the solid boundaries. The gold distribution of three (3) metre composites also identified overlapping lognormal populations and an indicator approach was used for the estimate. Semivariograms for the high grade gold indicator and low grade background were produced and used to define and orient the various search ellipses. Grades for gold were interpolated into blocks 10 x 10 x 5 metres in dimension by a combination of Indicator and Ordinary Kriging. A total of 66 specific gravity measurements showed no correlation to gold grades and as a result an average value of 2.51 was used above the oxide surface and 2.67 below this surface to convert volume to tonnage. Estimated blocks were classified based on geologic and grade continuity into Indicated and Inferred. As part of the 2015 PEA a conceptual open pit, based on $1300/oz Au, has been produced by Tetra Tech. As a result only blocks falling within this pit are now reported as a Resource within the following Tables. 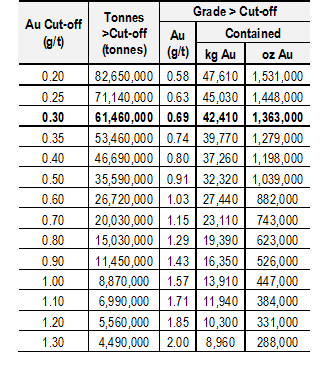 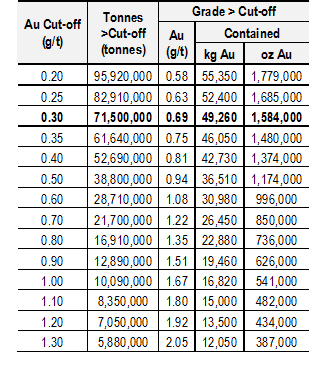 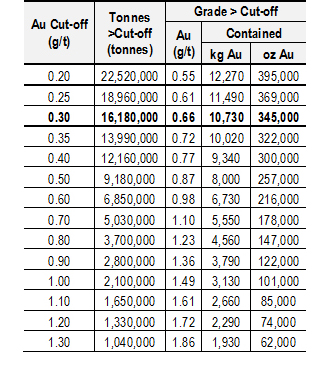 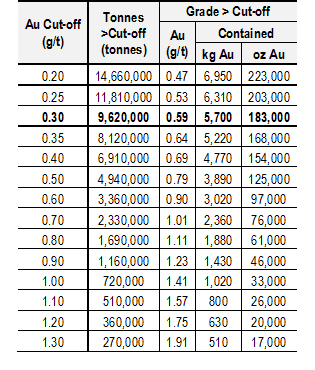 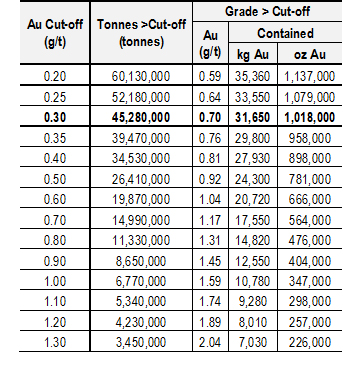 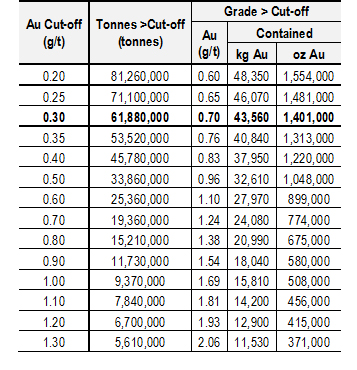 Waste will be hauled by truck to the Mine Rock Storage Facility (MRSF). The MRSF has been designed to permanently contain the overburden and waste material associated with the pit. The current MRSF design, located to the northeast of the pits, is built around the hill. The MRSF was designed with a buffer around the nearby creeks. The total MRSF design will contain 100% of the expected waste material planned to be generated - approximately 239 million tonnes of swelled material.
The mine has been planned using diesel blasthole drills, large haul trucks and rope shovels. Primary mine production is achieved using 64 Mt payload rope shovels along with 227 Mt payload haul trucks. The drills, shovels and haul trucks selected for the Project are scheduled to operate around the clock and require four crews on 12 hour shifts for complete shift coverage.

Gold recovery from the Golden Summit deposit will come from two separate processing methods. Oxide material will be crushed prior to loading onto a 10,000 tpd heap leach facility. The crushed oxide material will then be leached with a sodium cyanide solution. Gold from the pregnant leachate solution will then be recovered onto activated carbon and further refined in an elution/electrowinning circuit. The product from the electrowinning cells will be further refined into gold doré. Oxide gold recoveries of 80% are expected during operation.

Sulphide material containing gold will be processed in a 10,000 tpd bio-oxidation plant. The sulphide material will be processed by crushing and grinding the material prior to flotation and bio-oxidation of the sulphide concentrate. The oxidized slurry will be sent to a carbon-in-leach (CIL) circuit for cyanide leaching and recovery onto activated carbon. Gold loaded onto the activated carbon will then be recovered in the same elution circuit used for the oxide material, to produce gold doré. Sulphide gold recoveries of 90% are expected during operation.

The following key infrastructure will support the mine and process facilities:

Fairbanks serves as the regional service and supply center for interior Alaska and comprises a total population of nearly 90,000. Labour will come from the Fairbanks area where there is ready access to trained personnel. In addition the State of Alaska allows $20M of exploration expenditures to be carried forward and recovered against State taxes due.

The Golden Summit PEA was led by Tetra Tech, Inc., under the direction of project lead, Vicki J. Scharnhorst. The following consultants contributed to the PEA: 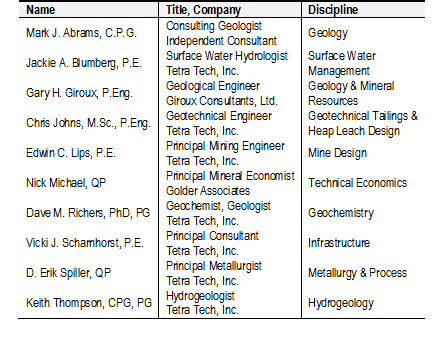 Given the results of the PEA, Freegold will begin advancing the Project to the Preliminary Feasibility stage. Additional drilling, metallurgical testing, environmental analyses, other permitting and property confirmation activities will need to be undertaken as part of this next level of study. Freegold’s disclosure of a technical or scientific nature in this press release has been reviewed and approved by Alvin Jackson of Freegold Ventures Limited, who serves as a Qualified Person under the definition of NI 43-101.

On behalf of the Board of Directors of Freegold

Neither the TSX Exchange nor its Regulation Services Provider (as that term is defined in the policies of the TSX Exchange) accepts responsibility for the adequacy or accuracy of this release.

The technical information in this Press Release for the Golden Summit Project is based on the following Technical Report to be issued on or before March 10, 2016: NI 43-101 Technical Report, Golden Summit Project, Preliminary Economic Assessment, Fairbanks North Star Borough, Alaska, USA, 2016, Tetra Tech, Inc. Authors of the PEA are independent of Freegold Ventures Limited and are Qualified Persons in accordance with NI 43 101.

The term “Mineral Resource” used in this news release is defined per NI 43-101. Though Indicated Resources have been estimated for the Project, this PEA includes Inferred Mineral Resources that are too speculative for use in defining Reserves. Standalone economics have not been undertaken for the measured and indicated resources and as such no reserves have been estimated for the Project.

Please note that the PEA is preliminary in nature, that it includes inferred mineral resources that are considered too speculative geologically to have economic considerations applied to them. There is no certainty that the PEA will be realized. Mineral resources that are not mineral reserves do not have demonstrated economic viability. Without limitation, statements regarding potential mineralization and resources, exploration results, and future plans and objectives of the Company are forward looking statements that involve various risks. Actual results could differ materially from those projected as a result of the following factors, among others: changes in the price of mineral market conditions, risks inherent in mineral exploration, risks associated with development, construction and mining operations, the uncertainty of future profitability and uncertainty of access to additional capital. See Freegold’s Annual Information Form for the year ended December 31st, 2014 filed under Freegold’s profile at www.sedar.com for a detailed discussion of the risk factors associated with Freegold’s operations.

Freegold is a TSX listed company focused on exploration in Alaska and holds the Golden Summit Gold Project, near Fairbanks as well as a 100% lease interest on the Shorty Creek Copper - Gold - Molybdenum Project near Livengood.