Highlights of the 2016 Drill Program: 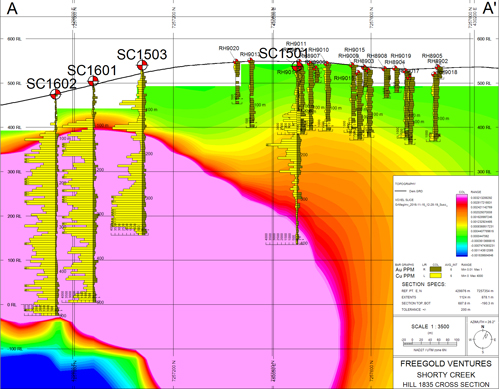 The magnetic anomaly over Hill 1835 covers an area measuring 700 metres by 1,000 metres and appears to be directly associated with the mineralization.

Mineralization on Hill 1835 was intersected in drill holes to a minimum depth of 500 metres and remains open in all directions. Mineralization consists of sulphide quartz stockwork veining and sulphide disseminations within strong secondary biotite alteration and anhydrite primarily situated within a flysch unit intruded by quartz feldspar porphyry sills and/or dykes. Disseminated and fracture-controlled pyrite, pyrrhotite, chalcopyrite, arsenopyrite and bornite have been identified (along with numerous secondary oxide minerals) in drill core. In addition to the significant Cu, Au and Ag mineralization reported from the 2016 drilling significant tungsten was also intersected in hole SC 16-01 which included 359 ppm W (0.045% WO3) over 207 metres and in SC 16-02 tungsten values averaging 252 ppm W (0.03 % WO3) over 409.6 metres including a higher grade interval of 519 ppm W (0.065% WO3) over 93.5 metres.

Five drill holes (2019.8 m) collared on Hill 1710, located 2.5 km northwest of Hill 1835, tested a large magnetic anomaly and a coincident copper-molybdenum soil anomaly. The magnetic anomaly strikes northeast-southwest and covers 6,000 metres x 1,500 metres. To date ground geophysics and soil geochemical surveys have been conducted over a small part (2,500 metres) of this large magnetic anomaly. The anomaly was tested with 5 holes spaced approximately 400 metres apart starting on the western edge of the soil geochemical anomaly. Each hole intersected both copper and molybdenum mineralization with the copper values increasing as the drilling moved to the northeast. Coincident with the increased assay values was the increasing amount of quartz feldspar porphyry intersected within both holes SC 16-06, and SC 16-07, the two most northeastern holes. Silver values were also elevated in these two holes. 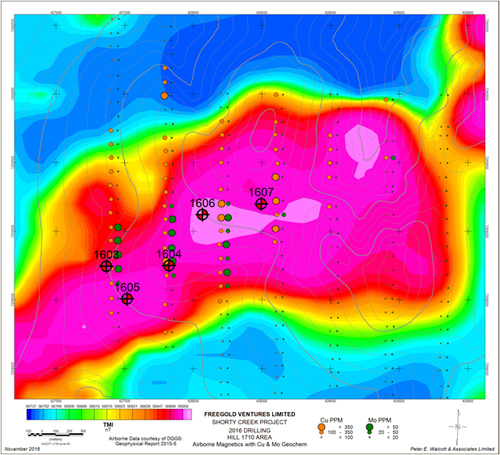 Hole 16-03, drilled to a depth of 257.6 metres, was the most westerly hole drilled and returned 172.6 metres grading 0.03% copper and 0.034% molybdenum. Hole 16-04 was collared approximately 400 metres to the east and intersected 0.05% copper and 0.014% molybdenum over it’s entire 426.5 metres length. Hole 16-05 was an angle hole drilled to southeast, aimed at testing the IP chargeability anomaly and encountered abundant fault gauge and broken rock with anomalous values throughout the hole.

A long section showing the holes with the assay values is below. Of particular significance is the presence of consistent mineralization throughout each hole along strike and in the increasing grade to the northeast. 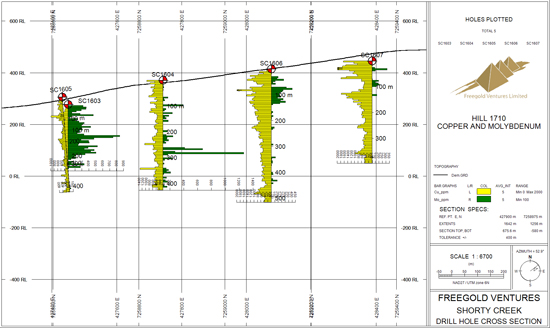 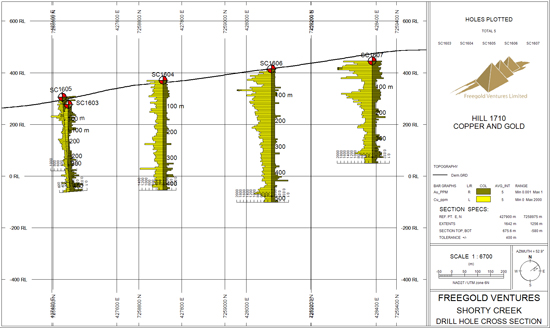 The 2016 drill program successfully confirmed the presence of a copper-gold-molybdenum porphyry system at Shorty Creek Project, with an alteration/mineralization footprint that covers an area of approximately 10 km in diameter. The airborne magnetic survey has identified a number of northeast trending magnetic highs. Copper-gold-molybdenum mineralization and associated porphyry alteration has been intersected in drill holes at Hills 1835 and 1710. Four additional targets (Hill 1890, Hill 1870, Steel Creek and Quarry) have been identified. All of these targets require follow-up exploration and diamond drilling.

These targets identified which have yet to be drilled are as follows:

Kristina Walcott, President and CEO, stated “The Shorty Creek target represents an exciting porphyry discovery in Alaska that has the potential to host a significant copper-gold-molybdenum resource. We are extremely pleased with the results of the 2016 program and given these highly encouraging results we look forward to further drilling to follow up on this exciting discovery”. 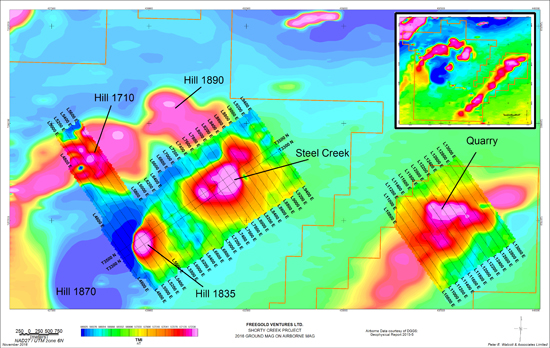 Drill cores were cut in half using a diamond saw, with one-half placed in sealed bags for geochemical analysis. Core samples were delivered to ALS Chemex at its facility in Fairbanks, Alaska. Quality control/quality assurance program including the insertion and monitoring of appropriate reference material (certified standards, blanks and duplicates) to validate the accuracy and precision of the assay results was implemented. The Qualified Person for technical information disclosed in this release is Alvin Jackson, P.Geo – Vice President Exploration and Development for the Company who is a “Qualified Person” as defined under National Instrument 43-101.


Some statements in this news release contain forward-looking information, including without limitation statements as to planned expenditures, exploration programs and the potential for the discovery of high grade resources. These statements address future events and conditions and, as such, involve known and unknown risks, uncertainties and other factors which may cause the actual results, performance or achievements to be materially different from any future results, performance or achievements expressed or implied by the statements. Such factors include without limitation the completion of planned expenditures, the ability to complete exploration programs on schedule and the success of exploration programs