Since drilling commenced on May 15th, 25 holes have been drilled in an area to the north of the current resource area. Using results of the previously completed RAB (Rotary Air Blast) drilling, ground resistivity and soil geochemistry, a series of vertical holes, spaced roughly 50 metres apart in an east -west-north-south grid pattern were drilled. (See attached map). Drilled to an average depth of 70 metres, the hole pattern was designed to determine if the current oxide resource could be expanded to the north as well as to establish boundaries to the current oxide resource.

Assays from the first 11 holes are below.

Results continue to demonstrate the potential for expansion of the current oxide resource at Golden Summit with majority of the holes returning average grades above the internal cut-off used in the Preliminary Economic Assessment completed in January 2016. Additional assay results will be reported as they become available. 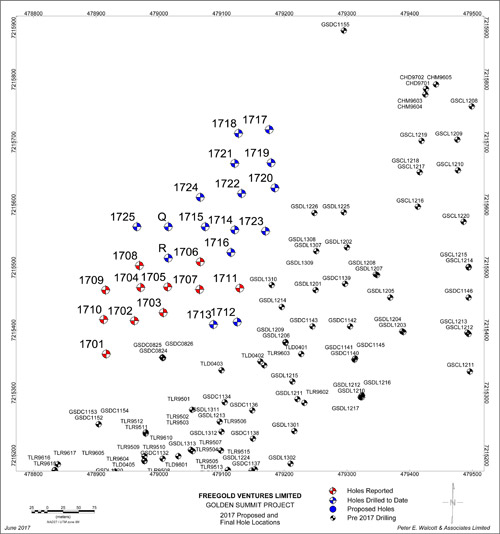