The Golden Summit project is a large bulk tonnage gold project with signiﬁcant room for expansion, which is located a 30-minute drive from Fairbanks, the second-largest city in Alaska (population of the greater Fairbanks area is approximately 100,000), and serves as a major population and supply center for the interior region of Alaska. 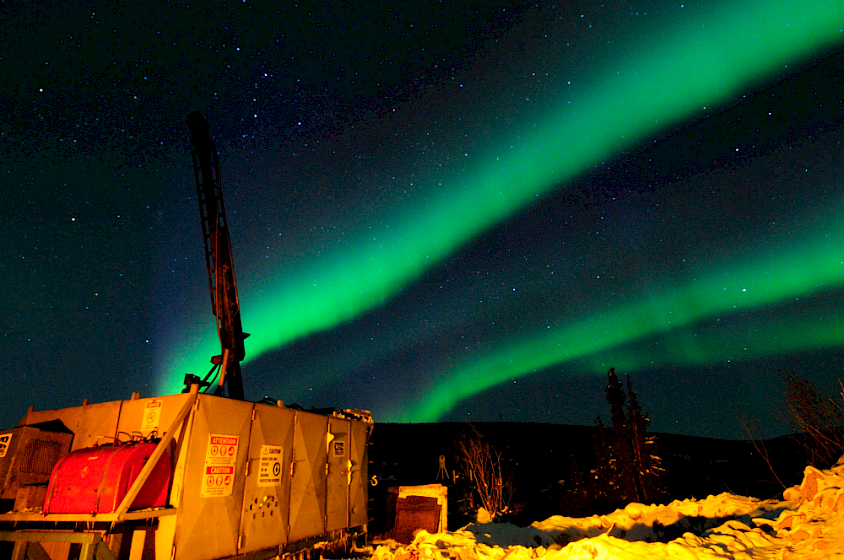 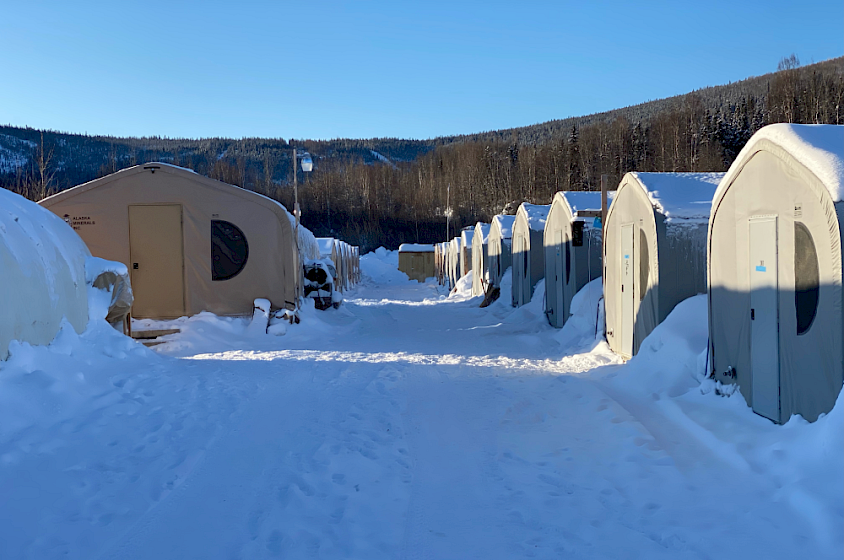 Golden Summit was the subject of an extensive drilling campaign during 2011 – 2013 resulting in multiple resource updates that showed the potential for significant resource growth. This was followed by a preliminary economic assessment in 2016 using a $1300 gold price. In 2017, a limited drill program was undertaken aimed at expanding the existing in pit oxide resource.

In 2019, following an extensive data review of past drilling and in conjunction with the resource model and block model level plans, Freegold identiﬁed what it believed to be the potential for a higher-grade corridor of mineralization extending from the area of the old Cleary Hill mine workings towards the Dolphin Intrusive. Based on this interpretation a drill program was initiated on the project in February 2020.

Hole GSDL2001 was the initial test of this hypothesis and returned 188 metres grading 3.69 g/t Au . Hole GSDL2001 encountered veins, veinlets and stockwork zones within areas of intense siliﬁcation. These results further conﬁrmed Freegold’s interpretation of a robust vein swarm system. Drilling resumed on the project in June of 2020 and continued until mid-December. Drilling resumed in February of 2021 and during 2021 a further 38,000 metres were drilled in 68 holes, with an average hole depth of 600 metres. Assays are pending for several holes. Cutting and sampling continued over the winter break to expedite results as quickly as possible.

Drill results are continuing to return multiple intercepts of higher-grade mineralization within the projected extension of the CVS. The CVS is an interpreted corridor extending south from the old Cleary Hill mine workings towards the Dolphin intrusive and consists of broad zones of intense siliciﬁcation and alteration that contain narrow high-grade veins, multiple veins, veinlets, and stockwork zones. 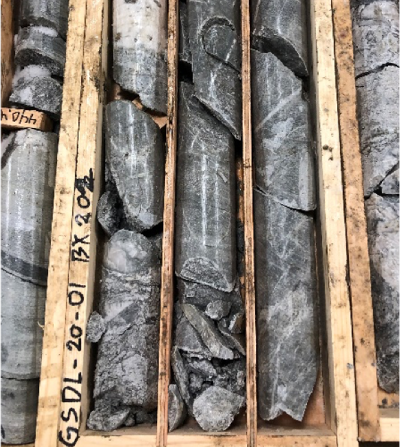 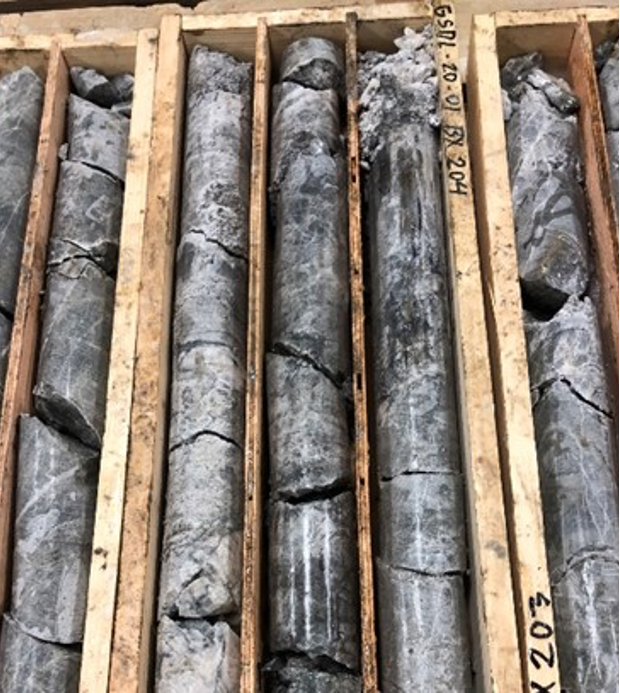 Photos from Hole GSDL2001:
Collared in the immediate footwall of the Dolphin intrusive.
Intense silification and veining throughout a broad zone.

Although the bulk of the current resource is hosted by the Dolphin intrusive, the extent of the Dolphin intrusive is not yet known. Dolphin is the likely driver of the mineralization found in the Cleary Hill area, which are found within the permissive pathways of schist and effectively form vein swarms. The Dolphin Cleary area currently covers an area of 1400 metres x 500 metres. 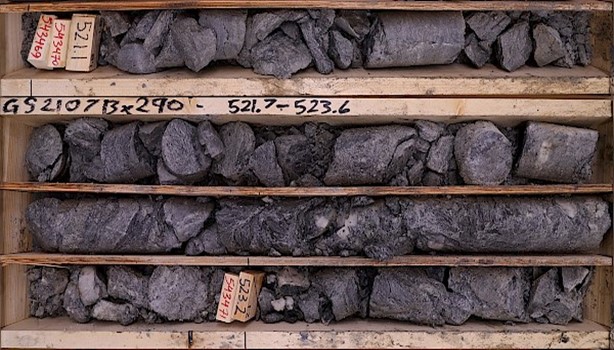 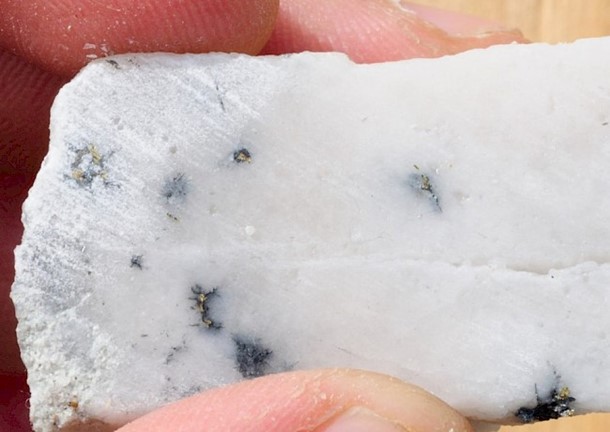 In February 2022 drilling resumed at Golden Summit. The initial 2022 program will be a continuation of the 2021 program looking for deeper, higher-grade mineralization, with an initial 20,000 metres planned. Results from the 2020-2021 program to date have demonstrated the potential for more extensive and higher than resource grade gold mineralization on the project intersecting numerous assay intervals over 30 g/t Au, more than any previous program.

The current program has multiple objectives beyond expanding the existing resource and potentially increasing its grade but also to advance the project through pre-feasibility.

Testing other targets on the project that may have the potential to host additional resources and host other buried intrusives throughout the project area. Ground geophysics and soil sampling have been conducted on these areas and further drilling is planned to test these other potential areas. 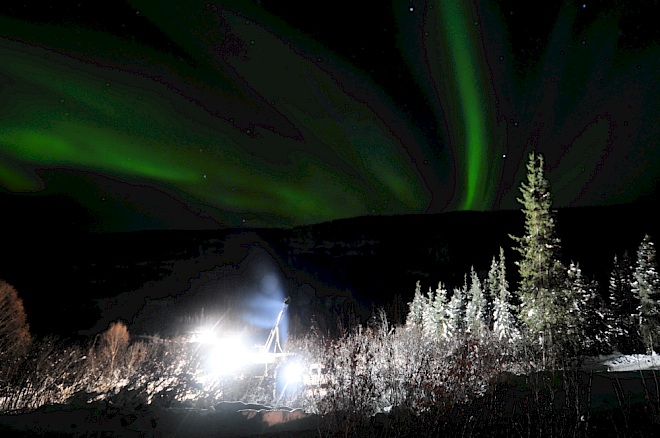 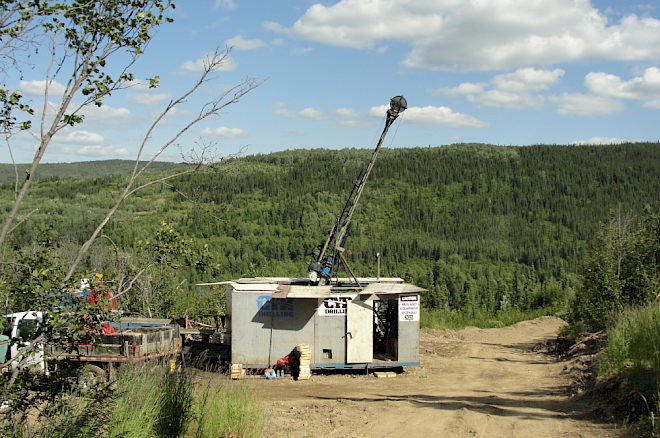 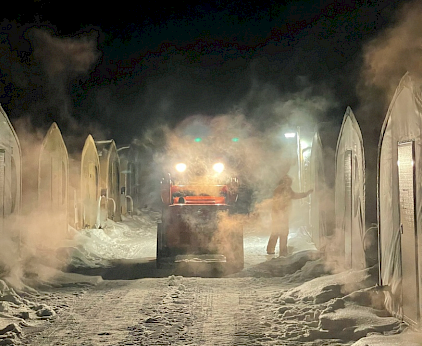 Freegold acquired an interest in Golden Summit in mid-1991 and conducted exploration including geologic mapping, soil sampling, trenching, rock sampling, geophysical surveys, core, reverse circulation, and rotary air blast drilling on the project. Drilling completed by Freegold on the Project between 1991 and 2009 totaled 26,902 metres of core and reverse circulation drilling in 214 holes and 26,640 metres of rotary air blast drilling in 2,028 holes before a comprehensive property compilation was completed in 2010. This compilation identiﬁed the potential to delineate a resource in the Dolphin area. A ground-based geophysical survey on the Dolphin area was also undertaken which indicated that the alteration in the Dolphin Area is well deﬁned by a low resistivity feature. This resistivity survey in conjunction with soil geochemistry and re-interpretation of previous drill results, provided the guidance for resource deﬁnition and expansion in the Dolphin area. In 2011 exploration focused on resource definition commenced. 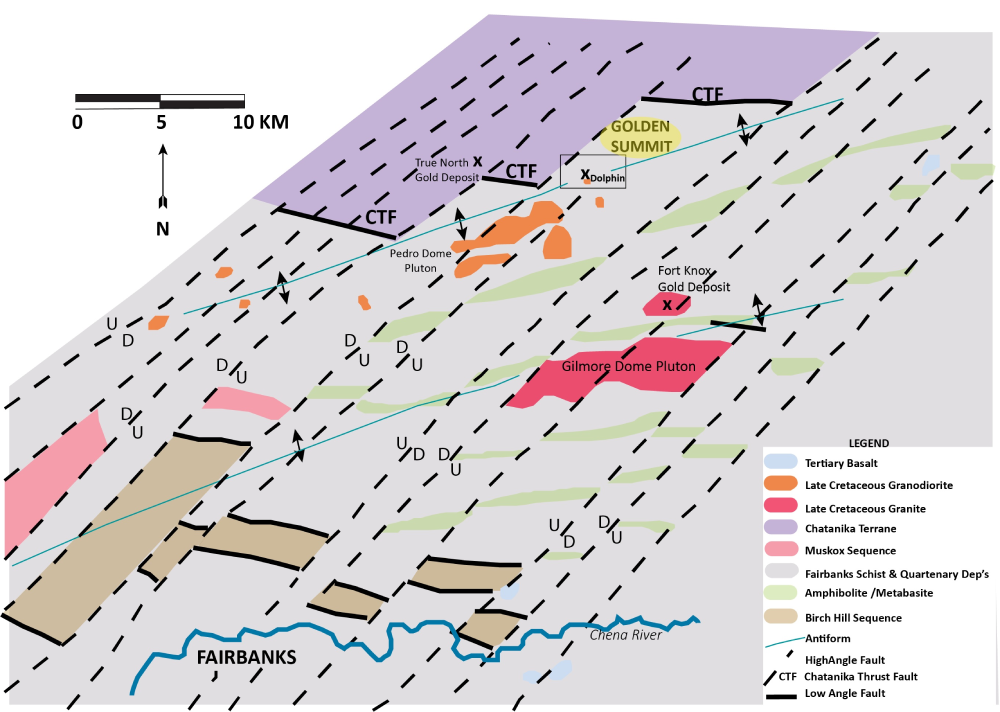 General geology of the Fairbanks Mining District, Alaska. Data from Newberry, and others, 1996 modified by Avalon Development, 2008, Freegold Ventures, 2021.

There are three main rock units found throughout the property in particular, Fairbanks Schist, Chatanika Terrane, and intrusive rocks. Both the Fairbanks Schist and Chatanika Terrane have been subjected to one or more periods of regional metamorphism. The intrusive bodies are post-metamorphism. Chatanika Terrane rocks lie structurally above the Fairbanks Schist and north of the Chatanika Thrust fault and comprise the northernmost portion of the property. Intrusive rocks are relatively minor on the Property, and are primarily represented by the Dolphin stock, although small granitic dikes are known in several locations. The Dolphin stock is located on the ridge between Bedrock and Willow Creek. Initial diamond core logging identified five intrusive phases within the Dolphin stock, including: 1) fine- to medium-grained, equigranular to weakly porphyritic biotite granodiorite; 2) fine- to medium-grained, equigranular to weakly porphyritic hornblende-biotite tonalite; 3) fine-grained biotite granite porphyry; 4) fine-grained biotite rhyolite to rhyodacite porphyry; and 5) rare fine-grained, chlorite-altered mafic dike. 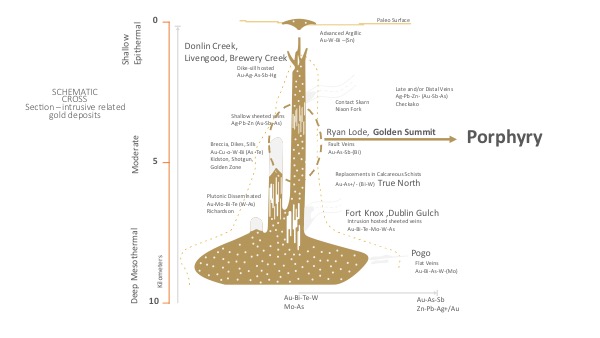 Small dikes of granodiorite cutting tonalite have been observed in core, and altered granitic dikes cut both altered and unaltered granodiorite and tonalite. This suggests multiple phases of intrusion and hydrothermal alteration. 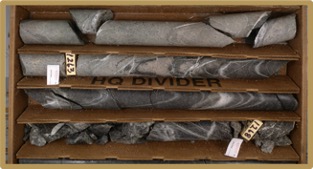 Two radiometric age dates, including two sericite Ar40/Ar39 plateau age dates (McCoy, 1996), place some constraints on the timing of crystallization and mineralization. The sericite ages were obtained from two different samples representing two distinctly different styles of gold mineralization. One sample, from stockwork style mineralization, was 90.1 Ma. Another sample, from a sericite shear-zone, was 88.3 Ma. These ages are quite similar to ages from Fort Knox (86.3-88.2 Ma). Due to age and chemical similarities, most associate the Dolphin and Fort Knox intrusive rocks with widespread intrusive-related gold deposits in the Tintina Gold Belt. 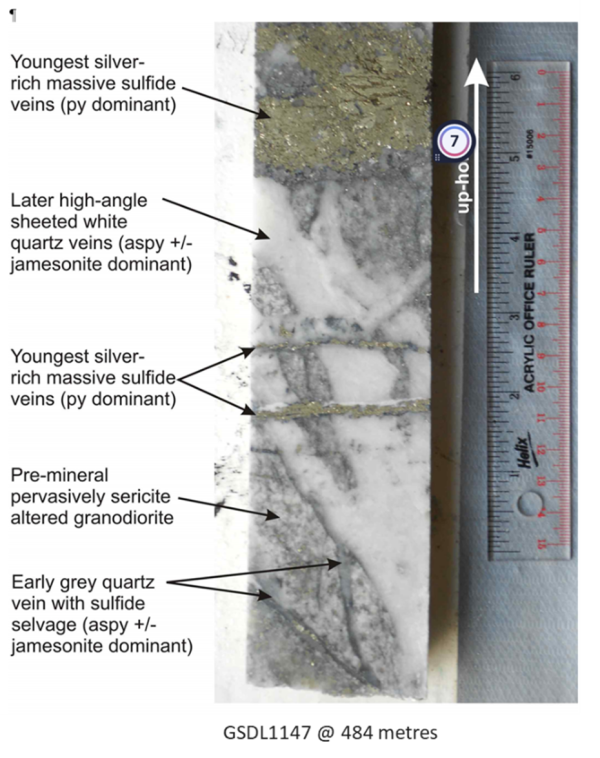 There are three styles of gold occurrences that have identified on the Property, including: 1) intrusive-hosted sulfide disseminations and sulfide-quartz stockwork veinlets (such as the Dolphin gold deposit); 2) auriferous sulfide-quartz veins; and 3) shear-hosted gold-bearing veinlets. All three types are considered to be part of a large-scale intrusive-related gold system on the Property. 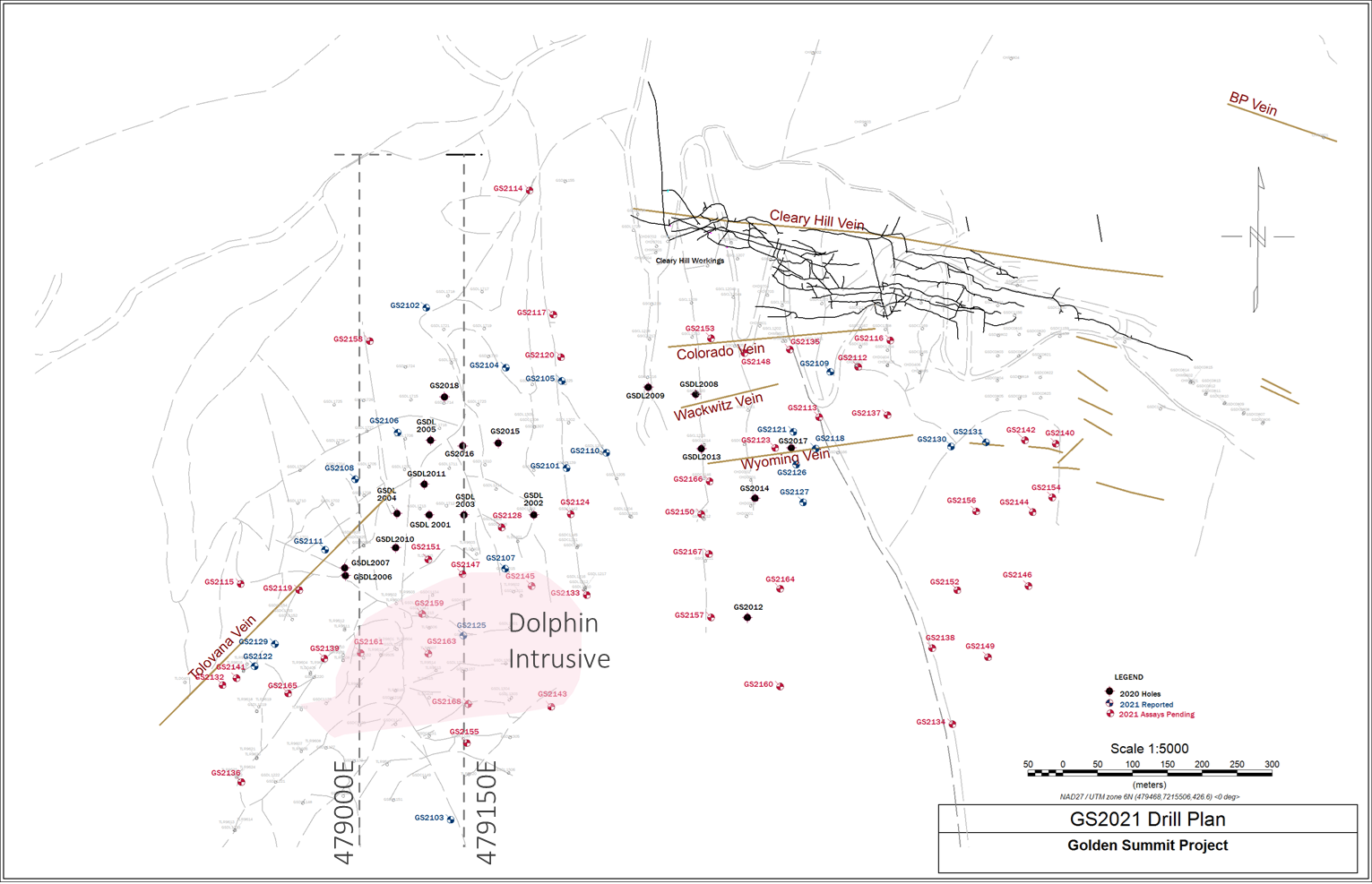 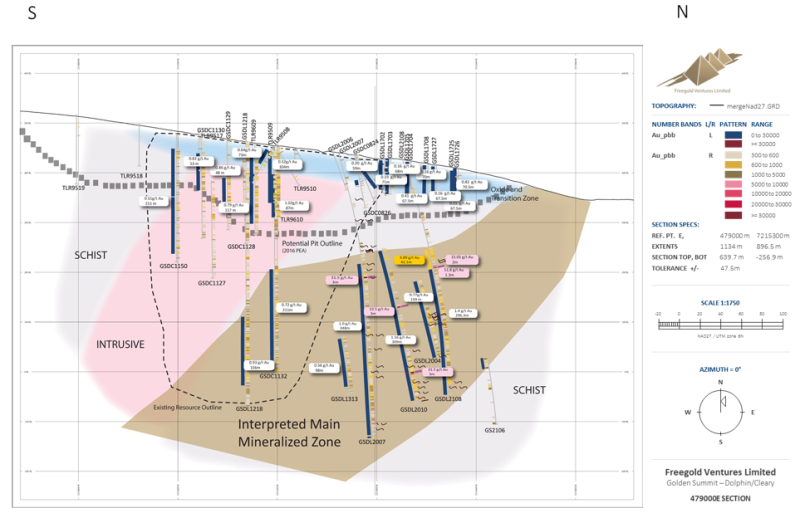 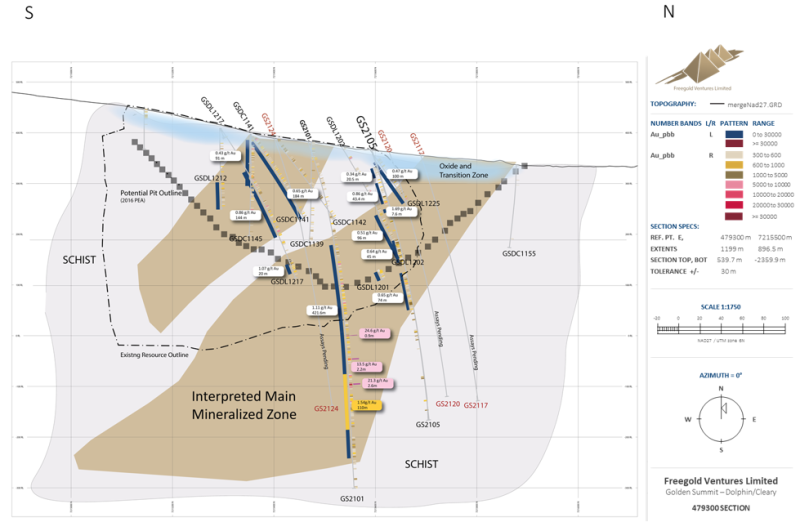 Metallurgical testing for the Project was initiated in 2012 with bottle roll tests being performed on 10 different drill samples with a primary objective of obtaining a preliminary indication of the cyanide leaching characteristics of the oxide mineralogy within the deposit. This test work was performed by Kappes, Cassiday & Associates (KCA). A second set of process test work started in 2013 and continued into 2014 on five different mineralogical composites. These tests were performed by SGS Canada Inc. (SGS). As part of this test work SGS received 279 drill core samples that were composited into five different rock types: oxide, transition, hornfels sulfide, intrusive sulfide, and schist sulfide. This test work primarily focused on investigation of various processing methods for the recovery of gold from sulfide materials. Additional bottle roll and column leach test work was performed later in 2014 to investigate grind sensitivities on four drill core composites of different mineralogy and to examine heap leach behavior in the oxide material. The different composites were designated as oxide, transition, intrusive sulfide, and hornfels sulfide. These composites were initially subjected to coarse bottle roll tests conducted at five different feed sizes. 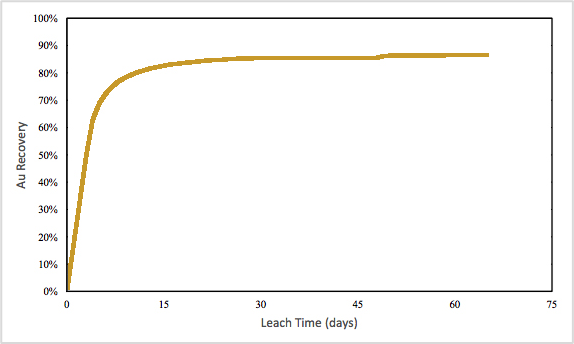 One column leach test was performed on the crushed oxide composite to determine heap leaching characteristics of the material. These tests were performed by McClelland Laboratories, Inc with results received in January 2015. Gold extractions over 80% were achieved within 14 days on coarse crushed material (80% -25 mm). The column test was permitted to run for 65 days and final extractions were 85% for gold.

Project cost estimates and economics are prepared on an annual basis. Based upon design criteria presented in the Tetra Tech Report, the level of accuracy of the estimate is considered ±35%.

The term “Mineral Resource” used above is defined per NI 43-101. Though Indicated Mineral Resources have been estimated for the Project, this PEA includes Inferred Mineral Resources that are too speculative for use in defining Mineral Reserves. Standalone economics have not been undertaken for the measured and indicated mineral resources and as such no reserves have been estimated for the Project. Please note that the PEA is preliminary in nature, that it includes inferred mineral resources that are considered too speculative geologically to have economic considerations applied to them that would enable them to be categorized as mineral reserves. There is no certainty that the PEA will be realized. Mineral resources that are not mineral reserves do not have demonstrated economic viability. Without limitation, statements regarding potential mineralization and resources, exploration results, and future plans and objectives of the Corporation are forward looking statements that involve various risks. Actual results could differ materially from those projected as a result of the following factors, among others: changes in the price of mineral market conditions, risks inherent in mineral exploration, risks associated with development, construction and mining operations, the uncertainty of future profitability and uncertainty of access to additional capital. See Freegold’s Amended and Restated Annual Information Form for the year ended December 31st, 2020 filed under Freegold’s profile at www.sedar.com for a detailed discussion of the risk factors associated with Freegold’s operations 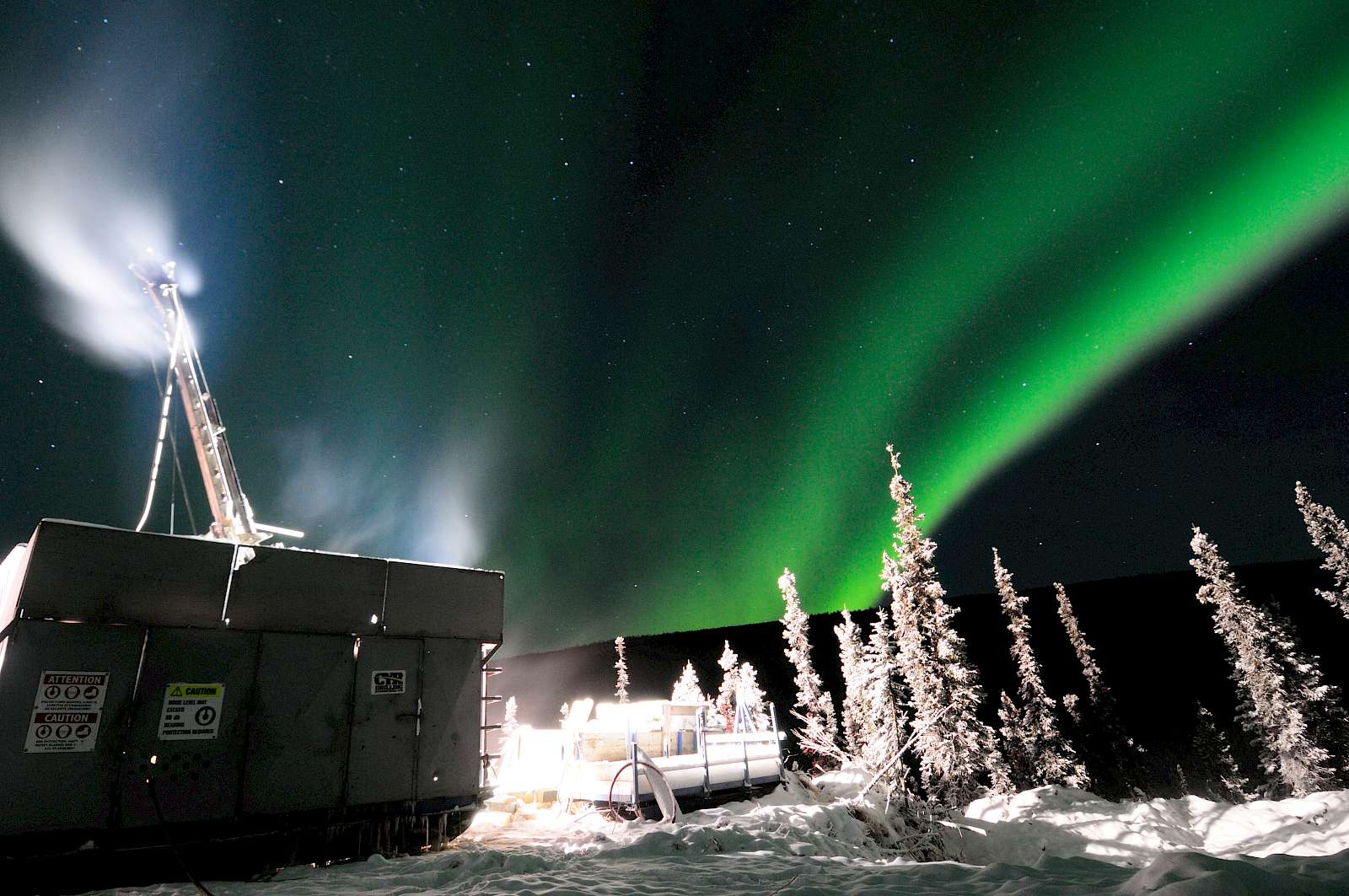