September 12th, 2013 (Vancouver, BC) - Freegold Ventures Limited (TSX: FVL, Frankfurt: FR4N) (“Freegold”) is pleased to report final assay results from its 2013 Dolphin/Cleary summer program for its road accessible Golden Summit Project. Golden Summit is located approximately 30 road km to the northeast of Fairbanks, Alaska. A total of 3 holes were drilled in the Dolphin Deposit area for a total of 5,468.5 feet (1,666.8 metres) during the 2013 summer program. Hole GSDL 1311 was the first hole drilled during the summer program and it intersected 180 metres grading 1.13 g/t gold and averaged 0.82 gt/ over the entire 585.5 metres. (August 14th, 2013) – (See attached map for hole locations) 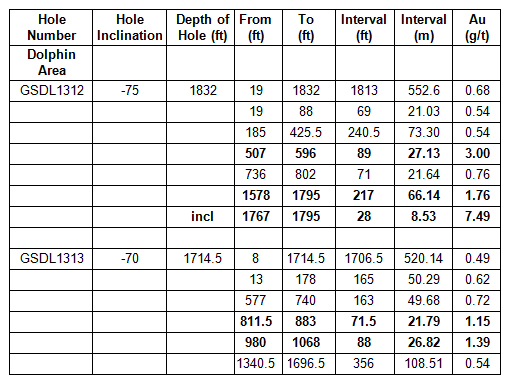 The Dolphin/Cleary area is the only area of the Golden Summit project that has been intensively drilled for resource definition and it remains open to expansion in all directions and to depth. Recent drilling has demonstrated the presence of higher-grade zones both within the Dolphin Intrusive and in the adjacent country rock. Equally encouraging is both holes GSDL 13-12 and 13-13 clearly demonstrate that these high grade intervals extend to depths in excess of 1,500 feet below surface. Additional drilling will be necessary to further evaluate these significant results.

Freegold has a comprehensive metallurgical program currently underway and the results will be incorporated into a Preliminary Economic Assessment on the Dolphin/ Cleary Area. The resource area at present covers a 300 metre by 1.5 km area (approx. 110 acres) however the entire Golden Summit project area covers approximately 13,000 acres and hosts numerous other significant exploration targets with potential to host additional resources.

The Qualified Person who has reviewed the technical disclosure contained in this release is Curt Freeman, M.Sc., P Geo– geological consultant for the project. Drill cores were cut in half using a diamond saw, with one-half placed in sealed bags for geochemical analysis. Core samples were picked up on-site by ALS Chemex and transported to their facility in Fairbanks, Alaska. A sample quality control/quality assurance program was implemented.