A total of 13 holes were drilled during the program for total footage of 11,491 feet (3502 m). The program was aimed at expanding the known resource and upgrading the current NI 43-101 resource. The resource estimate was completed by Giroux Consultants Ltd. of Vancouver, BC. Canada. Inferred resources are 37.3 million tonnes averaging 1.11 g/t Au for 1,331,000 ounces of gold utilizing a cutoff value of 0.5 grams/tonne (g/t) as a possible open pit cutoff.

A complete table of the drill results is shown below. In addition to the drilling carried out this summer a ground geophysical survey (induced polarization) was completed over the known intrusive. Results indicate that in addition to the Central Zone, where all the drilling was conducted this year, a significant geophysical anomaly was defined in the North East Zone where limited previous drilling has indicated mineralization of similar character to the Central Zone. This area will be the focus of next year’s planned 10,000 metre drill program aimed at significantly increasing the overall resource on the project.

“Oz/T” is troy ounces per short ton; “g/t” is grams per metric tonne 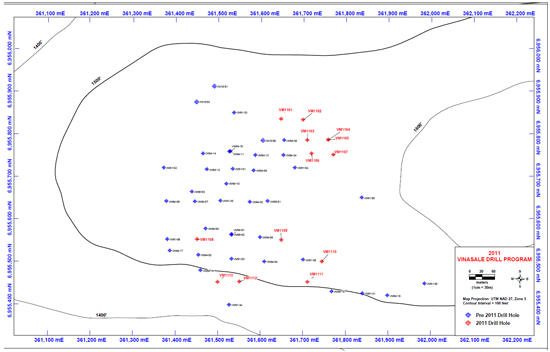 Click on the map image to view in PDF

To date mineralization in the Central Zone extends over a length of 400 metres and remains open to the south and at depth.

The Vinasale Project is located approximately 310 kilometres northwest of Anchorage and 26 kilometres south of McGrath. Access to the Project area is by helicopter from a base in McGrath, and there are daily commercial flights from Anchorage to McGrath. Freegold entered into a Mining Exploration Agreement with an Option to Lease the Vinasale Project from Doyon Limited, an Alaskan Native Regional Corporation in 2007.

ALS Chemex was used to analyze 1301 core samples via fire assay analysis for gold plus multi element ICP-AES and ICP-MS analysis using 4 acid digestion. Quality control entailed insertion of 35 blanks, 101 standards and 15 duplicates into the sample stream, at the rate of approximately one QA/QC sample every tenth assay, yielding approximately 10% of the total assays. On average all of the reported standard and blank assay values were within an acceptable margin of error.

David Adams, Msc is the Qualified Person responsible for the technical disclosure contained in this release.

Freegold is a TSX listed company focused on the exploration of gold projects in Alaska. In addition to the Vinasale Project, the Company is also actively exploring the Golden Summit Gold Project, near Fairbanks, and the Rob Gold Project near the Pogo Gold Mine in the Goodpaster Mining District of Alaska.