A total of 27 holes were drilled in an area to the north of the current resource area. Using results of the previously completed RAB (Rotary Air Blast) drilling, ground resistivity and soil geochemistry, a series of vertical holes, spaced roughly 50 metres apart in an east -west-north-south grid pattern were drilled. (See attached map). Drilled to an average depth of 70 metres, the hole pattern was designed to determine if the current oxide resource could be expanded to the north as well as to establish boundaries to the current oxide resource.

Assays from last 6 holes are reported below: see attached map for locations

The results of the 2017 program have demonstrated the potential for expansion of the current oxide resource at Golden Summit with majority of the holes returning average grades above the internal cut-off used in the Preliminary Economic Assessment completed in January 2016. This completes the Phase 1 oxide expansion program at Golden Summit. A ground geophysical program (Induced Polarization) was also completed to the west of the Dolphin Resource. Combined with soil geochemistry (Au, Bi and W) this has outlined an additional expansion target well west of the previously identified expansion area. This new resistivity anomaly covers a 1,500 metres by 300 meter area.

The Dolphin remains open to the west and the southwest and additional drilling will be necessary to determine if the resource can be expanded in these areas. Other areas that may have the potential to enhance the overall grade of the resource is the potential extension of the original high grade Cleary Hill vein system as indicated by the ground geophysical program.

Drill cores were logged, photographed and placed in sealed bags for geochemical analysis. Core samples were picked up at the logging facility by ALS Chemex and transported to their facility in Fairbanks, Alaska. ALS Chemex was used to analyze core samples via fire assay analysis for gold plus multi element ICP-AES and ICP-MS analysis using 4 acid digestion. Quality control entailed insertion of blanks and standards into the sample stream, at the rate of approximately one QA/QC sample every tenth assay. Reported standard and blank assay values were within an acceptable margin of error. 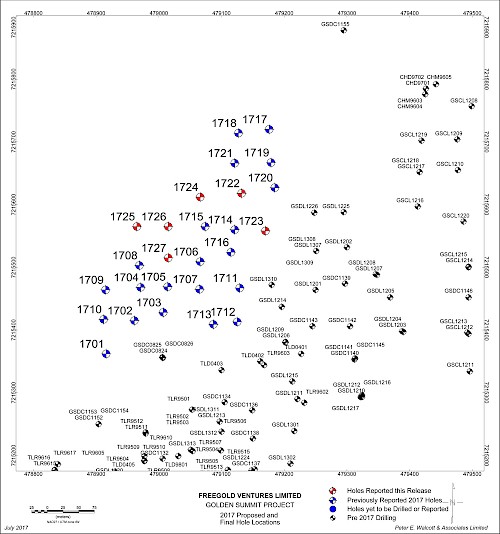