Mineralization on Hill 1835 was intersected in drill holes to a minimum depth of 500 metres and remains open in all directions. Mineralization consists of sulphide quartz stockwork veining and sulphide disseminations within strong secondary biotite alteration and anhydrite primarily situated within a flysch unit intruded by quartz feldspar porphyry sills and/or dykes. Disseminated and fracture-controlled pyrite, pyrrhotite, chalcopyrite, arsenopyrite and bornite have been identified (along with numerous secondary oxide minerals) in drill core. In addition to the significant Cu, Au and Ag mineralization reported from the 2016 drilling significant tungsten (wolframite) was also intersected in hole SC 16-01 which included 359 ppm W (0.045% WO3) over 207 metres and in SC 16-02 tungsten values averaging 252 ppm W (0.03 % WO3) over 409.6 metres including a higher grade interval of 519 ppm W (0.065% WO3) over 93.5 metres.

The 2016 drill program successfully confirmed the presence of a copper-gold-molybdenum porphyry system at Shorty Creek Project, with an alteration/mineralization footprint that covers an area of approximately 10 km in diameter. The airborne and ground magnetic surveys have identified a number of magnetic highs which appear to be coincident with copper mineralization. Four additional targets (Hill 1890, Hill 1870, Steel Creek and Quarry) were identified.

The 2017 program will focus on further expanding the mineralization at Hill 1835 and initial drill testing of the Steel Creek and Quarry targets.

1. Steel Creek is located directly northeast of Hill 1835. Additional ground magnetic and geochemical surveys were undertaken on this target during the 2016 exploration program. The Steel Creek anomaly measures 700 metres x 2,000 metres and is associated with a strong magnetic signature similar to Hill 1835.

2. Quarry is located approximately five kilometres east of Hill 1835. A northeast trending magnetic high that is over 10 kilometres in length and associated with stockwork veined quartz-feldspar porphyry was staked during the 2016 exploration program. Ground magnetics and soil geochemistry over a small portion of the 1,000 metre by 10,000 metre anomaly were also completed. Soil geochemistry returned both strong copper and molybdenum values. The presence of oxidized quartz-feldspar porphyry was noted. 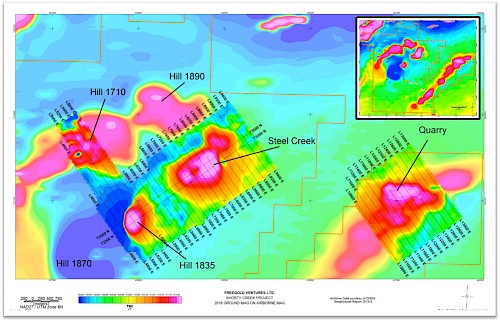 Drill core was cut in half using a diamond saw, with one-half placed in sealed bags for geochemical analysis. Core samples were delivered to ALS Chemex at its facility in Fairbanks, Alaska. Quality control/quality assurance program including the insertion and monitoring of appropriate reference material (certified standards, blanks and duplicates) to validate the accuracy and precision of the assay results was implemented. The Qualified Person for technical information disclosed in this release is Alvin Jackson, P.Geo – Vice President Exploration and Development for the Company who is a “Qualified Person” as defined under National Instrument 43-101.

Without limitation, statements regarding potential mineralization and resources, exploration results, and future plans and objectives of the Company are forward looking statements that involve various risks. Actual results could differ materially from those projected as a result of the following factors, among others: changes in the price of mineral market conditions, risks inherent in mineral exploration, risks associated with development, construction and mining operations, the uncertainty of future profitability and uncertainty of access to additional capital. See Freegold’s Annual Information Form for the year ended December 31st, 2016 filed under Freegold’s profile at www.sedar.com for a detailed discussion of the risk factors associated with Freegold’s operations.Readers are cautioned not to place undue reliance on forward-looking statements. Except as required by law, Freegold expressly disclaims any intention or obligation to update or revise any forward-looking statements, whether as a result of new information, future events, or otherwise.